Do You Shop in the New Luxury Wing at Square One? 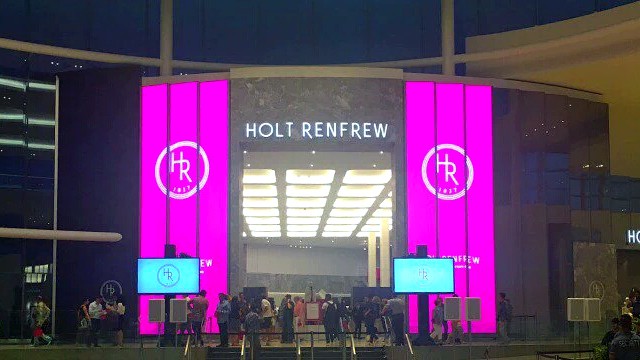 Holt Renfrew, the luxury shopping hotspot that was one of Square One’s most highly anticipated new openings, has been offering higher-end goods to Mississauga shoppers since opening its doors in July 2016.

But while the massive 130,000 sq. ft. anchor store was one of the hottest new arrivals, it wasn’t the only higher-end retailer to set up shop in Mississauga’s fast-evolving landmark shopping centre. Back in March of 2016, the mall announced the official opening of its long-awaited luxury wing and heralded the influx of such acclaimed retailers as Harry Rosen, kate spade new york, Stuart Weitzman, Michael Kors, Alex & Ani, Rolex at Raffi Jewellers and more.

While all of the new shops are relatively luxe, Holt Renfrew generated significant buzz–especially since it signalled the arrival of a glitzy urban fixture in our fast-growing suburb.

The high-end, two-storey store boasts such luxury brands as Gucci, Prada, Hugo Boss, Jimmy Choo and more and the new Square One location is actually the fourth largest in Canada.

As some of you might know, many Holt locations boast a chic restaurant known as Holt’s Cafe. Right now, you can check out said cafe at the 50 Bloor Street West location in Toronto and the store in Yorkdale, but you cannot access the resto’s decadent menu items in Mississauga because the cafe has not yet opened.

And, sadly, it doesn’t appear it’s going to open in the immediate future.

According to a Holt’s spokesperson, there’s currently no information on when the cafe might open its doors. While that might not seem like a big deal, it’s disappointing for people who want to enjoy a fancy afternoon tea every once in awhile.

The Holt’s Hour menu is sublime and features pakoras, dumplings and truffle chips.

So, so intriguing (but so very, very fancy).

While it’s hard to gauge whether or not there’s local demand for the in-store restaurant, it would be interesting to see how locals would respond to it should it open in the near future. It’s definitely unique in terms of the types of dishes it offers and it’s safe to say that it would be very one-of-a-kind in a city where fine-dining brunches are not quite so de rigueur (although both the Waterside Inn and the Glenerin Inn offer decadent, luxurious brunches that are probably frequented more commonly on special occasions).

The delayed opening also begs another important question–how do people feel not just about Holt Renfrew, but about the entire luxury wing in general?

Square One is smart to include higher-end retailers (which isn’t something brand new to the mall by any stretch) because they operate alongside more mid-range and affordable brands.

The mall is different from Yorkdale and even Sherway Gardens in the sense that it’s not afraid to offer shoppers everything from Walmart to Holt Renfrew. It’s a place where residents can come to purchase a watch that ranges in price from $20 to $20,000. Shoppers can score a ton of deals at Forever21 or purchase a luxe piece at Aritzia (which they can also do at Yorkdale or Sherway, to be fair).

If and when the cafe opens, diners will have a choice between a prosecco and frittata-laden brunch or a quick bite at New York Fries.

All that said, inquiring minds at insauga.com want to know–how often do you shop in the luxury wing at Square One and will you eat some tasty mid-day scones if and when Holt’s Cafe opens?