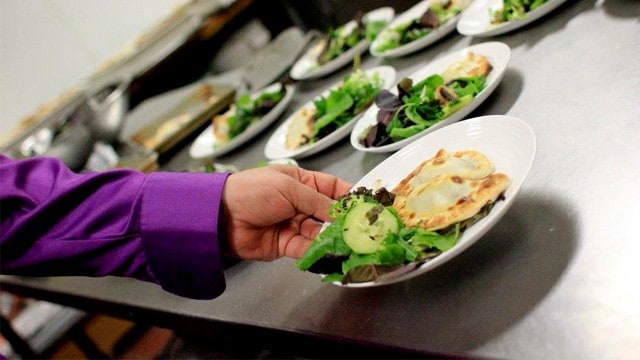 There is undeniably a food scene in Mississauga and a growing one at that. A scene which local restaurants sometimes struggle to fill especially with TDot being a neighbouring city filled with tonnes of options.

The food scene in Mississauga is one that I personally rave about; we have some great talent including Adrian Rusyn (Breakwater Restaurant), Bevan Terry (Rogues Restaurant), Dialo Kinghorn (Port 229 Bistro), and Luigi Macerola (Aielli Ristorante) just to name a few. And despite the home grown talent we have in Sauga, I still find that a lot of people I know still make the trek to Toronto for dinner. Perhaps the reason behind this insanity is the fact that Mississaugans don’t know what exists in their own yards.

Mississauga will be graced with the first ever Dishcrawl, a night filled with food sampling, giveaways and an opportunity to meet fellow foodies, chefs and restaurateurs. Think pub crawl, but instead of a night of inebriation and stumbling, you will be filled with delicious feature dishes by four of Mississauga’s Chefs. It’s a perfect event to learn about Mississauga’s food scene and support our local restaurateurs.

Dishcrawl was founded in San Jose, California, quickly spread its way across North America and will be landing in Mississauga on April 3rd at 7 pm. Foodies will have a chance to explore four different restaurants in Port Credit and the surprise element to the evening is that the locations are kept on the down low until the night of the event. Imagine it as going on a blind date, you just never know what to expect and that’s the fun part of it all. And I’m sure that Port Credit won’t disappoint since it does have some of the best restaurants Mississauga has to offer.

The meeting location is sent via email to ticket holders two days prior to the event date, so foodies are kept in suspense until the night of the event. The concept is super cool! It is so late 90’s afterhours scene, which brings back some fond memories of some great nights. What better way is there to bring people together than food?

Here’s a little tidbit of what your palate will be graced with – bunuelos a Spanish mini donut. Who doesn’t love a fried piece of dough, especially when it originates from the country that is the Mecca of food and is home to some of the world’s best chefs.

Tickets are $60 per person and can be purchased at www.dishcrawl.com/mississauga but you can score $5 off the ticket price until Monday, March 31st by using insauga’s discount code “insauga5”.