Did You Know You Can Get Uber at Pearson Airport in Mississauga? 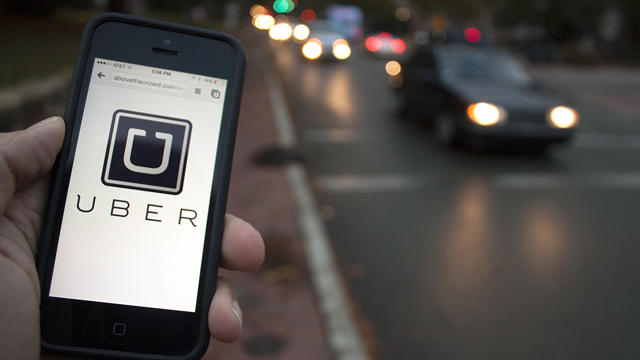 While things had been silent on the Uber front for a few months, the popular yet embattled ridesharing company made its way back into Mississauga headlines when a recent Public Vehicle Pilot Program Committee Meeting was abruptly adjourned because of a “disruption in the council chambers” (some irate taxi drivers began hurling insults at Mayor Crombie over what they believe to be her pro-Uber stance).

While Mississauga appears to be struggling to launch its long-awaited ride-sharing pilot program, it lifted its temporary “ban” on the service (although it’s still illegal under city bylaws) a few months back and is working–ever so slowly, to be fair–towards launching the program that will formally test the service in the city.

While Uber is not yet regulated in the city, it is operational.

That said, there is one place UberX cannot get you and that is Pearson Airport (although, to be clear, it can drop you off).

But other Uber vehicles can.

“UberBlack has operated at Toronto Pearson since fall 2014 as a pre-arranged black car pick up service,” explains Siobhan Desroches, senior adviser, communications with the Greater Toronto Airports Authority (GTAA). “UberX does not operate at Toronto Pearson.”

According to Uber’s website, you can indeed request specific Ubers at YYZ. The cars you can order include the aforementioned UberBlack (a high-end luxury sedan operated by a professional driver) and UberSUV (part of UberBlack). You can also order UberSelect, which is a little more affordable.

There is no option for UberX on the website.

It’s important to note that run-of-the-mill cabs can’t do random airport pickups either.

“There are two license types – an AMTV (Airport Municipal Transportation Vehicle) and APTV (Airport Public Transportation Vehicle, which includes limo service),” explains Carley Smith DeBenedictis, senior communications advisor with the City of Mississauga. “Both are licensed by the city of Mississauga and these vehicles also hold airport licenses. Both operate under the direction of the GTAA and they pick up at the airport and take to whatever municipality they have been directed. Under the GTAA model, they have to hold a GTAA license and a license from the municipality in which they operate (some are Mississauga, some are Toronto etc.)”

As for what differentiates airport taxis and limos from traditional cabs, it’s basically the fact that airport vehicles operate on a flat rate tariff system. The vehicles do not come equipped with meters and ride rates are pre-set based on where you’re coming from or going to in Mississauga or surrounding municipalities.

While Mississauga has been tough on Uber, the GTAA (much like Toronto), has been more willing to accept and utilize the service.

“In regards to UberBlack, it was a combination of meeting the needs of our passengers and regulating their service,” says Desroches. “Some of the limo drivers operating out of Toronto Pearson handle Uber calls, so it’s something the drivers were already implementing.”

As for whether or not UberX can start doing airport pickups any time soon, it’s too early to say–especially since Mississauga has yet to formally legalize the service (UberBlack and UberSelect are pre-arranged pickup services with municipal and GTAA licenses, so they’re not affected by Mississauga’s current stance on UberX and other ridesharing companies).

“While we are always looking at options to better meet our passengers’ needs, no definitive timeframe has been set, and we continue to follow the city of Mississauga’s discussions on licensing closely,” says Desroches.

With Mississauga still struggling to formulate its own policies (even while looking to other municipalities for guidance), it’ll be interesting to see how, say, more demand for the service from travelers might impact the process.

Although there are a lot of transportation options for people traveling from Pearson, there are likely still travelers who want to hop in the most affordable Uber after a long flight rather than flag down a more costly cab/UberBlack, inconvenience a friend or family member, navigate the bus system with luggage or pay to park for an extended period of time.

With more demand for UberX and more eyes on Mississauga and its pilot program, the city will likely have to deal with the matter sooner rather than later (and push through the rowdiness at committee meetings).