Did You Know How Many Corporate Offices & Major Companies are in Brampton? 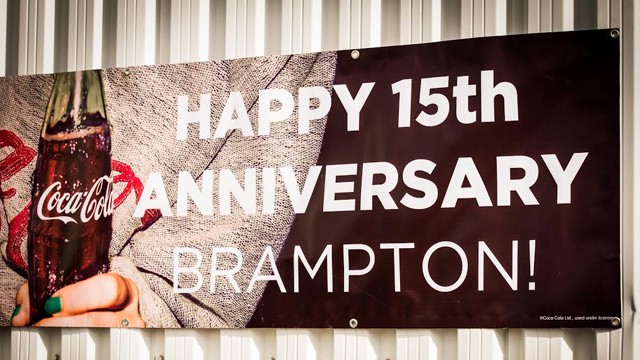 While many people believe that suburbs are for living and cities are for working, it’s important to remember that living and working in the same city isn’t just a pipe dream–especially in Brampton.

For some lucky Bramptonians, the commute can be 30 minutes or less, depending on their field.

Here are some major players in Brampton you may have never noticed because, flowers…

The sight of that little fruit bat can make you crave a rum and Coke each time you exit Hwy. 410 at Steeles Ave.

‘Untameable Since 1862,’ the beverage processor received an estimated $350,000 from the federal and provincial governments last May to upgrade equipment to create new packaging – made from recycled materials – and labelling for its Superior, Gold, Black, and Fuego products.

The Bacardi bottling facility in Brampton produces more than seven million litres of rum for the Canadian market each year.

“Rum is one of the most competitive spirit segments in Canada,” Bacardi Canada’s vice-president and managing director Paul Tepperman said at the time, adding “we expect these changes will help grow our business in Canada.”

When the announcement was made, Brampton-Springdale MPP Harinder Malhi said the funding would allow for growth in the local economy.

“This investment will be focused on creating jobs and keeping them local, right here in Brampton to help Ontarians achieve a more secure retirement,” she said.

One of Brampton’s top employers, more than 1,300 people are on payroll.

Long-standing partnerships with all major and independent content providers in Canada means access to more than 160,000 DVDs, Blu-rays, CDs and video games, according to its website. The eOne distribution centre on Driver Rd. works with powerhouses such as Sony, Microsoft, Nintendo, and Toronto’s independent Canadian film distributor Mongrel Media .

Those classic Galen G. Weston commercials probably had you dropping the term “decadent” like nobody’s business to describe cookies.

Roughly 3,200 full-time staff work out of the Brampton office at 1 President’s Choice Circle, where they’ve got their own private GoodLife Fitness location.

Fiat Chrysler Automobiles employs an estimated 3,400 staff at the Williams Pkwy. facility, where they pump out the Dodge Challenger, Dodge Charger and Chrysler 300 to be shipped south. More than 900 vehicles are cranked out daily. In 2015, Chrysler Canada changed its name to FCA Canada Inc. to match its global parent company.