If you were hoping the pandemic would cool the housing market in Mississauga, you might be very disappointed to hear that low-rise homes are costlier than they were in January 2020, with detached house prices climbing 25 per cent year-over-year.

According to data released by the Toronto Regional Real Estate Board (TRREB), the average home price (all housing types combined) hit $890,020 (up 14 per cent year-over-year) in Mississauga in January 2021, with the average detached house price coming in just under $1.5 million.

In Brampton, the average home price in the city crossed the $900,000 mark and detached house prices climbed a whopping 34 per cent year over year.

In Halton (Oakville, Burlington, Milton and Halton Hills), the average price in the region climbed 24 per cent. 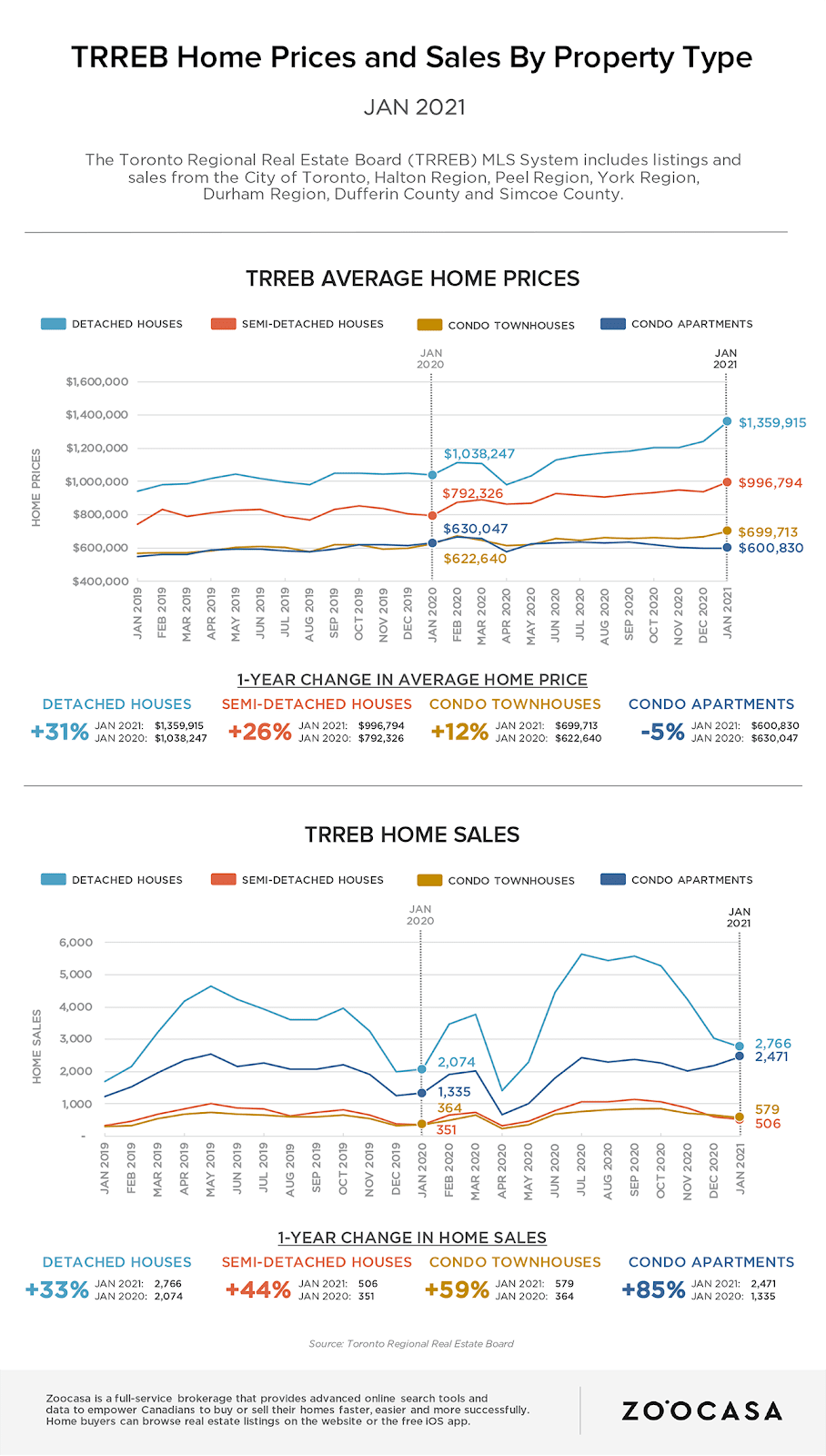 "We've reverted back to the scenario that really we've been talking about a lot over the past number of years, where the supply of listings coming onto the market is not keeping up with growth in transactions," said Jason Mercer, TRREB's chief market analyst, at a press conference.

"Taking those demand factors into account, plus what we're looking at for new listings coming into the market, that spells continued tightness."

Mercer's remarks come as the area rang in the new year with an unprecedented flurry of home purchases that pushed the number of sales up by 52 per cent and the average selling price to nearly $1 million.

The spikes were fuelled by an atypical winter, where people were discouraged from gathering for the holidays in an effort to quell COVID-19, the region wasn't often being blanketed with snow and interest rates were low.

That left people with fewer social engagements, more lending power and more time to hunt for new properties, especially ones outside the hot downtown core that offered an escape from the city while people continue to work from home.

As far as Mississauga goes, real estate website and brokerage Zoocasa says that city saw a total of 635 homes trading hands in the new year, up 45 per cent since last year. Overall, new listings grew 21 per cent and active listings grew 8 per cent compared to January 2020.

Zoocasa says that Mississauga condo sales were up 57 per cent annually, with 257 units sold. A total of 110 condo townhouses and 179 detached homes were sold in January, growing 47 per cent and 41 per cent respectively. Semi-detached homes followed closely with a growth of 40 per cent in home sales at 66 properties sold.

TRREB president Lisa Patel said those spikes will be fuelled in part by the rollout of COVID-19 vaccines, declining cases of the virus in hot spots and very low mortgage rates.

"Once we shift out of this lockdown, those that are comfortable will have the opportunity to put their homes on the market," she said.

"That might open up supply a little bit more."

The board believes new condominium apartment listings will slow towards the second half of the year and low-rise listings will remain constrained.

Market conditions for low-rise homes, including detached houses, will remain very tight, with sales rising at a faster pace than listings, TRREB warned.