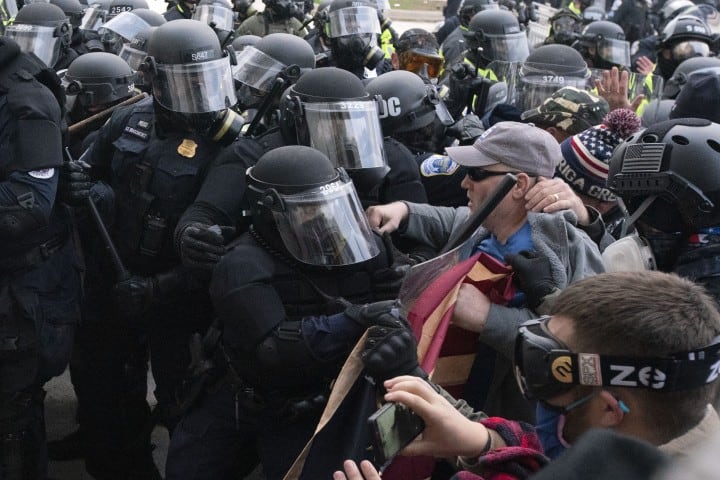 OTTAWA — Canadians and their elected leaders have a shared responsibility to protect and defend the principles of democracy, which need constant tending to remain strong, Justin Trudeau said Friday.

It was only the prime minister’s latest repudiation of this week’s stunning and deadly attack on Capitol Hill — a violent incursion that he blamed squarely on Donald Trump.

In an opening statement during a news conference in Ottawa, Trudeau called Wednesday’s events an “assault on democracy” that was clearly incited by the sitting U.S. president.

“As shocking, deeply disturbing, and frankly saddening as that event remains, we have also seen this week that democracy is resilient in America, our closest ally and neighbour,” he said.

“Violence has no place in our societies, and extremists will not succeed in overruling the will of the people.”

He acknowledged that Canada is “not immune” to the forces responsible for the unrest in the U.S.

“We have a responsibility as Canadians to continue to lead with respect, to engage substantially with different points of view and to never resort to violence as a way of impacting public discourse,” he said.

Trudeau said he discussed the issue during his call Thursday with provincial and territorial premiers, reminding them that despite its strengths, preserving democracy takes work.

He called it an accomplishment to have and maintain a political system where the party that loses an election “gracefully concedes” and where rivals work together for everyone.

“We have this in Canada because Canadians make it possible,” he said.

“Canadians expect their political leaders to protect our precious democracy by how we conduct ourselves.”

They also expect elected leaders to engage in rigorous debate, that it be grounded in the facts, and that its enemies be identified and strongly repudiated.

“We must always work to secure our democracy, and not give comfort to those who promote things that are not true or give space for hate and extremism.”