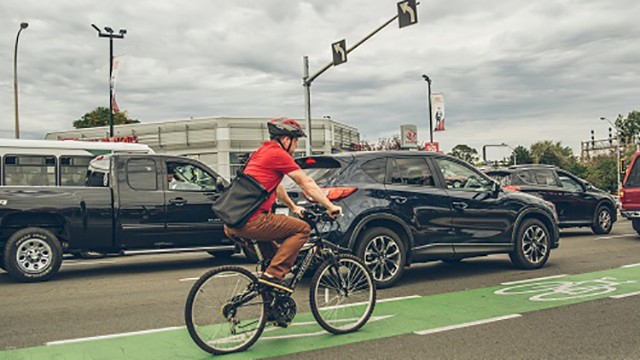 With many businesses having returned to full capacity, more residents are starting to return to the office, which has resulted in an influx of cars on the road.

Some Brampton residents have noticed, due to changes throughout the city, some lanes have been decreased in order to facilitate other forms of transportation, including cyclists.

“The changes to Charolais are causing needless traffic jams,” Reddit user KrypticKraze posted on the Brampton subreddit page. “They have cut the two lanes to one in a heavy traffic zone to add a bike lane despite little to no cyclists.”

The addition of bike lanes throughout the city has been a polarizing issue for Brampton residents, and many have taken to social media to express their frustration.

“The bike lanes make no sense. It’s a case of inconveniencing the majority, and creating more pollution through idling, to appease the minority of cyclists,” Reddit user BramptonRaised said. “Some of the bike lanes have been around for more than a year and I have yet to see one cyclist actually use them. I’m sure there are a few who use the bike lanes, but I haven’t seen them being used as intended.”

“The re-striping of Charolais is a pleasant surprise,” Brampton resident Kevin Montgomery commented. “I sometimes use Charolais to get to the west side of Brampton. It’s not that busy, which is why I would use it. Besides, cars cause traffic. Nothing more, certainly not bike lanes.”

“The City of Brampton approved its Active Transportation Plan and it is built upon the 2040 Vision which states that we shall ensure all modes of transportation are accommodated,” he said.

Vicente also specified the City’s decision to add bike lanes is intended to both attract industry and reduce emissions.

Over the course of 2021, the City intends to add 29.3 km of additional linear cycling infrastructure throughout Brampton.

A full list of transportation projects the City has recently completed, is planning, and is currently working on is available online.