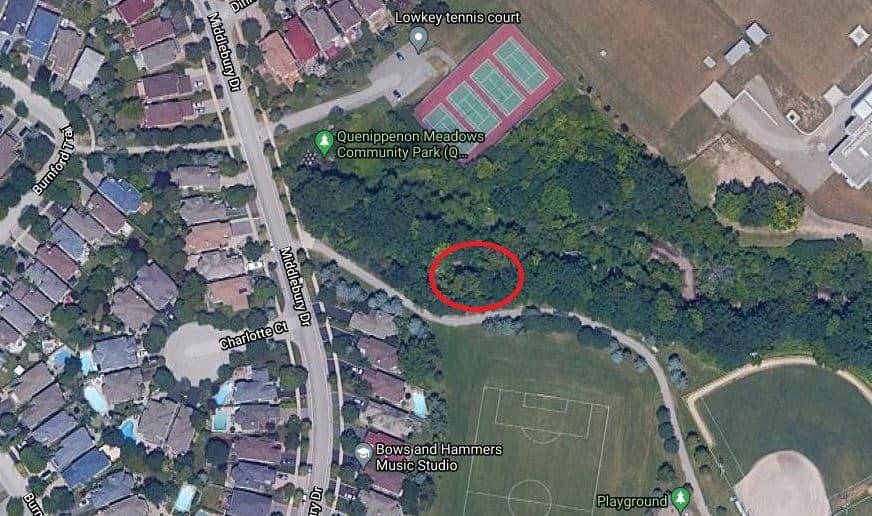 Police say officers recovered the body of a dead dog in a park near Erin Centre Blvd. and Middlebury Dr. in Mississauga. (Photo courtesy of Peel Regional Police)

Investigators are asking the public for help in an animal cruelty investigation after a dead dog was found in a Mississauga park.

On Wednesday (Nov. 24) around 4:15 p.m., Peel Regional Police officers were called to a wooded area of a park near Erin Centre Blvd. and Middlebury Dr. in Mississauga.

When officers arrived on scene they found the animal had “obvious signs of trauma,” a police spokesperson said.

The PRP said investigators have few details regarding the dog, and it’s unclear how long the body may have been in the woods.

Investigators said they are working with veterinary pathologists at the University of Guelph to gather more information about the animal’s cause of death.

Anyone with information on this incident is asked to contact investigators from the Peel Regional Police at (905)453-2121 ext. 1133. You can also contact Crime Stoppers anonymously by calling 1-800-222-TIPS (8477) or by visiting www.peelcrimestoppers.ca

Police thanked the Mississauga Animal Services and the Animal Health Laboratory at the University of Guelph for assistance with investigation.