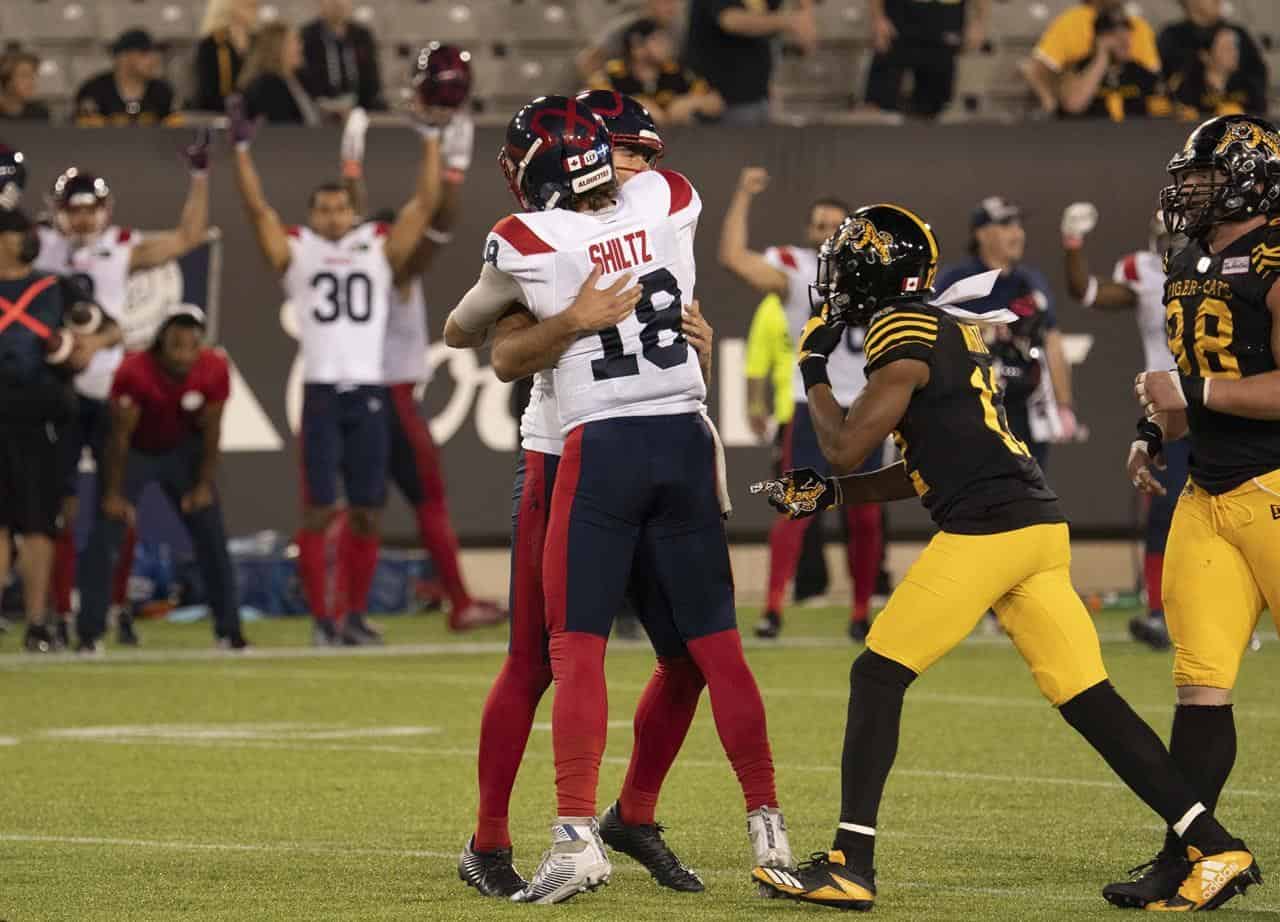 It goes down as their third win of the season but it means much more than that to Vernon Adams Jr. and the Montreal Alouettes.

Not only did the Alouettes erase a 14-point, fourth-quarter deficit for their first victory in three games, they also halted the Tiger-Cats’ home win streak at 11 contests before a Tim Hortons Field sellout of 18,000.

“Everybody is just relieved,” Montreal linebacker Patrick Levels said. “Excited but relieved to finally get that monkey off our back.

“Getting out of that losing streak was everything. Beating them here is great but at the end of the day, it didn’t matter who it was, we just had to win. It just happened to be Hamilton.”

Taylor Bertolet’s 55-yard field goal into the wind on the final play of regulation forced overtime. It came after Adams Jr.’s 28-yard TD strike to Eugene Lewis with 29 seconds remaining put Montreal (3-4) ahead 20-17.

Adams’ toss came on third-and-20 after he was sacked by Hamilton’s Tunde Adeleke. With the game on the line, Adams Jr. calmly found Lewis, who made the grab in tight coverage and with a Ticat defender running in front of him.

Ackie’s 11-yard sack of Hamilton’s Jeremiah Masoli allowed Montreal to get the ball at the Ticats’ 49-yard line with 1:25 remaining.

Adams Jr. missed most of the first half with an ankle injury late in the first quarter but returned on Montreal’s opening possession of the third. He finished 17-of-26 passing for 209 yards with two TDs and two interceptions.

Montreal moved into third in the East Division standings, just two points behind Hamilton (4-4) and the idle Toronto Argonauts (4-3). Up next for the Alouettes will be the Ottawa Redblacks (2-5), who beat Edmonton 34-24 on Tuesday, at Molson Stadium on Oct. 11.

Adams Jr. said the win over Hamilton could be one that galvanizes Montreal, which was still flagged 12 times for 125 yards and lost the turnover battle 3-2.

“We’ve just got to watch this film, flush it and let’s get ready for Ottawa,” Adams Jr. said. “They’re a good team, they’re energized from their last game . . . so we’ve just got to make sure we’re ready to do our thing.”

Cote also had three goals and two converts for Montreal.

Masoli made his third start of the season but first since suffering a rib injury in Hamilton’s 30-8 road loss to Saskatchewan on Aug. 14. He finished 23-of-33 passing for 223 yards and at times looked like a quarterback playing for the first time in nearly two months.

Addison had seven catches for 73 yards in his ’21 debut, missing the first half of the season with a knee injury. Receiver Brandon Banks, back after missing three starts due to a rib ailment, registered four receptions for just 15 yards.

“We had opportunities to win and we didn’t do it so credit them,” Hamilton coach Orlondo Steinauer said. “Sometimes in the ebb and flow of the game you’re going to have to find a way to win these types of games and tonight we didn’t.

“I think its pretty evident from our standpoint as to the why. It’s just going to be a matter of not making the same mistakes repeatedly or else it’s going to be really challenging for us down the stretch.”

Thomas Erlington recovered his own fumble for a 13-yard TD run six minutes into the third. Then Masoli hit Addison for the two-point convert and a 17-3 Hamilton lead.

Hamilton took a 6-3 lead into halftime after Cote’s 42-yard attempt to end the second fell just short into the wind. But it was a half of missed opportunities for the Ticats.

Hamilton appeared to go ahead 10-3 when Masoli hit Tim White on a 40-yard TD strike at 12:31. But Montreal successfully challenged the play and it was called back by an offensive pass-interference call against White.

But Montreal returned the favour with an illegal contact penalty that helped keep Hamilton’s second drive alive as Bertolet’s 25-yard field goal at 13:59 gave the Ticats their halftime edge.

Bertolet opened the scoring with a 32-yard boot to end the first. He had a chance to do so earlier but missed from 45 yards out after punter Joel Whitford recovered Adarius Pickett’s fumble on a punt return at the Montreal 47-yard line.