Crazy Police Pursuit Near Square One Leads to This 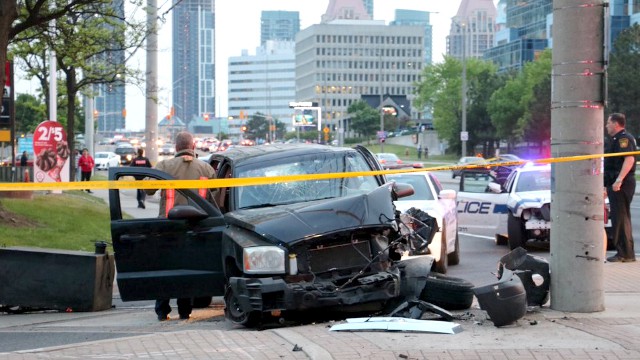 A police chase that happened on Wednesday night near Square One resulted in two people being taken into custody with minor injuries, according to the QEW South Post.

Police were pursuing a black vehicle driving erratically near Burnhamthorpe Road and Hurontario Street at 8:30 p.m.

Const. George Tudos said the driver failed to stop for police, but was forced to stop when it ultimately crashed into a street light.

It wasn’t the only vehicle to take a hit, however, as a pair of Peel Police cruisers were also damaged in the chase.  There’s no word on whether any officers were injured.

Paramedics treated the black vehicle’s occupants and took them to the hospital as a precaution.

The incident has also resulted in multiple roads being closed down, for one block in every direction between Burnhamthorpe Rd. and Hurontario St.

The province’s Special Investigations Unit (SIU) isn’t immediately involved in this case, but that may change; the SIU handles incidents involving police and civilians that result in serious injury or death.

“If it meets their threshold, then they will invoke their mandate,” said Tudos.

VIDEO: Footage of the Police Pursuit at City Centre