After a three-year pandemic-induced hiatus, the ​CP Holiday Train will return to the rails this season on its first cross-continent tour in three years, with stops in Oshawa and Bowmanville next week.

The CP Holiday Train, which raises money, food and awareness for local food banks in communities along the CP network, offered virtual concerts in 2020 and 2021.

The train will visit Durham Region November 29 with its first stop in Bowmanville at 1:45 p.m. at the Scugog Street/Wellington Street crossing with the concert between 2 and 2:30. The train then proceeds west to Oshawa, where it will stop behind the Wal-Mart at 680 Laval Street, off Stevenson Road. Arrival time will be 3 p.m. with the concert running from 3:30 to 3:45.

The performers on this leg of the journey are Oji-Cree artist, Aysanabee, from Sandy Lake First Nation, who blends folk, soul, and alt-pop sounds to share stories of his roots through music; and JUNO award-winning singer-songwriter Tennille Towns from Grand Prairie, Alberta. Tennille’s debut album picked up Debut Album of the Year at the 2021 Juno Awards and Album of the Year at the 2021 Canadian Country Music Awards.

Other performers along the route, which goes across the country and tours the USA as well, include Alan Doyle, Mackenzie Porter and Lindsay Ell, among others. Spectators can expect all performances to feature a blend of classic holiday songs with popular original music.

While this holiday concert series is free to the public, visitors are encouraged to bring non-perishable food items in support of Food Banks Canada.

“I’m grateful to the CP team members who adapted during the COVID-19 pandemic to deliver two exceptional virtual Holiday Train shows and to all those who continued to donate while we kept community members safe,” said Keith Creel, CP’s President and Chief Executive Officer. “The Holiday Train is all about families and communities coming together to celebrate the season and help those in need. We are excited to be back out on the rails and in our communities, taking these two beautiful trains across our network and sharing the joy that comes with gathering in the spirit of giving.”

The 2022 tour will launch on November 23 with the Holiday Train’s first-ever Maine shows in Jackman, Brownville Junction and Hermon. Also, for the first time, the Holiday Train will host shows on November 24 in Lac-Megantic, Sherbrooke and Farnham, Quebec – the first Canadian stops of 2022. The tour will feature 168 live shows, including Toronto on November 29; and a final show in Port Coquitlam, B.C., on December 18. A full schedule is available at cpr.ca/holidaytrain.

“Food banks and communities across Canada are so excited to see the CP Holiday Train return, as it brings together the City of Calgary to kick off the holidays and give back at the same time,” said Calgary Food Bank President and CEO James McAra. “The Calgary Food Bank is so grateful for CP’s continued support to help us build a Canada where no one goes hungry.”

Since the Holiday Train program launched in 1999, it has raised more than $21 million and collected five million pounds of food for community food banks across North America. At the Oshawa stop in 2016 1,540 pounds of food and nearly $1,500 in cash was donated.

“This year, more than ever, the support, awareness and goodwill that the CP Holiday Train brings will make an impact beyond imagination to the food support programs of East Side Neighborhood Services,” said Mary Anstett, Vice President, Community Engagement for East Side Neighborhood Services in Minneapolis. “With the support that Holiday Train brings in, we can rest assured that so many will have warm nutritious food on their tables in the coldest months.”

The Bowmanville stop will be in aid of St. Vincent de Paul Food Bank, Clarington East Food Bank and Salvation Army Family Services; the Oshawa stop will raise food and cash for Feed the Need in Durham. A complete list of the food banks that CP is supporting this year can be found here. 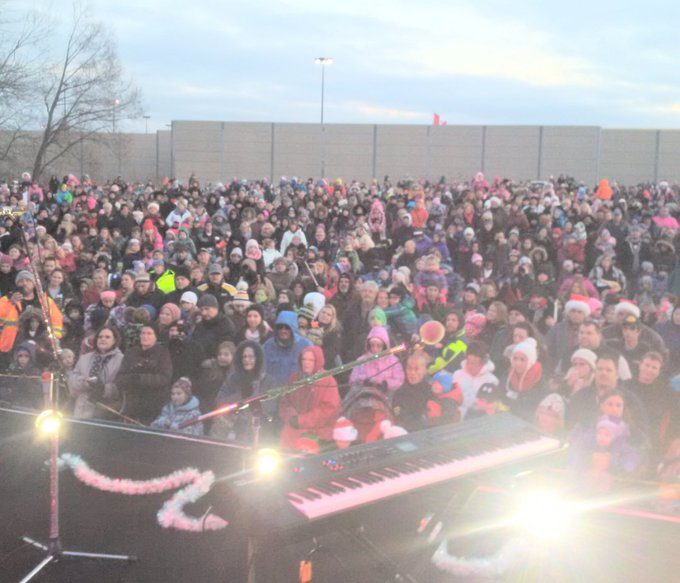