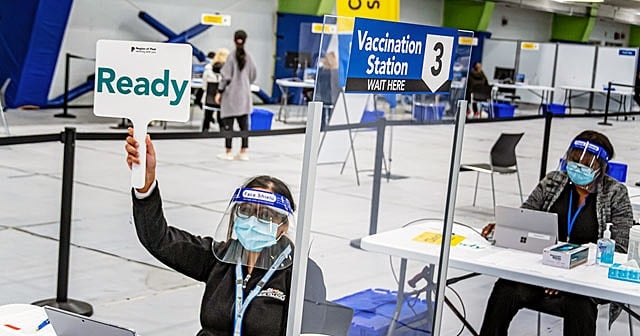 The Provincial government is considering a plan that could see half of all new vaccine shipments delivered to Mississauga, Brampton and other hotspot areas.

Ontario Health Minister Christine Elliott said it is considering the plan on the advice of health experts who now believe hotspots where COVID numbers are high should be treated before those in older age groups.

Currently hotspots are getting a quarter of all new vaccine shipments.

“It’s something we are looking at,” said Elliott adding a decision on the matter would be made soon and will be based on the availability of the vaccine.

Ontario’s COVID-19 Science Advisory Panel made the recommendation to switch tactics last week saying that hotspots are the main source of community spread of the virus and should be targeted directly.

The panel believes that targeting areas with high transmission rates would bring down hospitalizations and deaths.

“Early analysis of Ontario’s COVID-19 vaccine rollout reveals inequities in vaccine coverage across the province, with residents of higher risk neighbourhoods being least likely to get vaccinated,” the panel said in a released statement.

The news comes as Ontario faces more delays in the delivery of vaccines from both AstaZeneca and Moderna. However, the province is expected to receive higher numbers of the Pfizer vaccine in the weeks ahead which may allow for the shift in strategy.

Elliot said the expected boost from Pfizer may more than make up for the shortfall of the other vaccines and allow the hotspot approach to take place.

The increase in Pfizer may also be able to fill the void at the pharmacy vaccination program if doses of AstaZeneca begin to dry by next week as expected.