COVID cases rising, Jason Kenney hoping for 2022 bounceback : In The News for Dec. 29 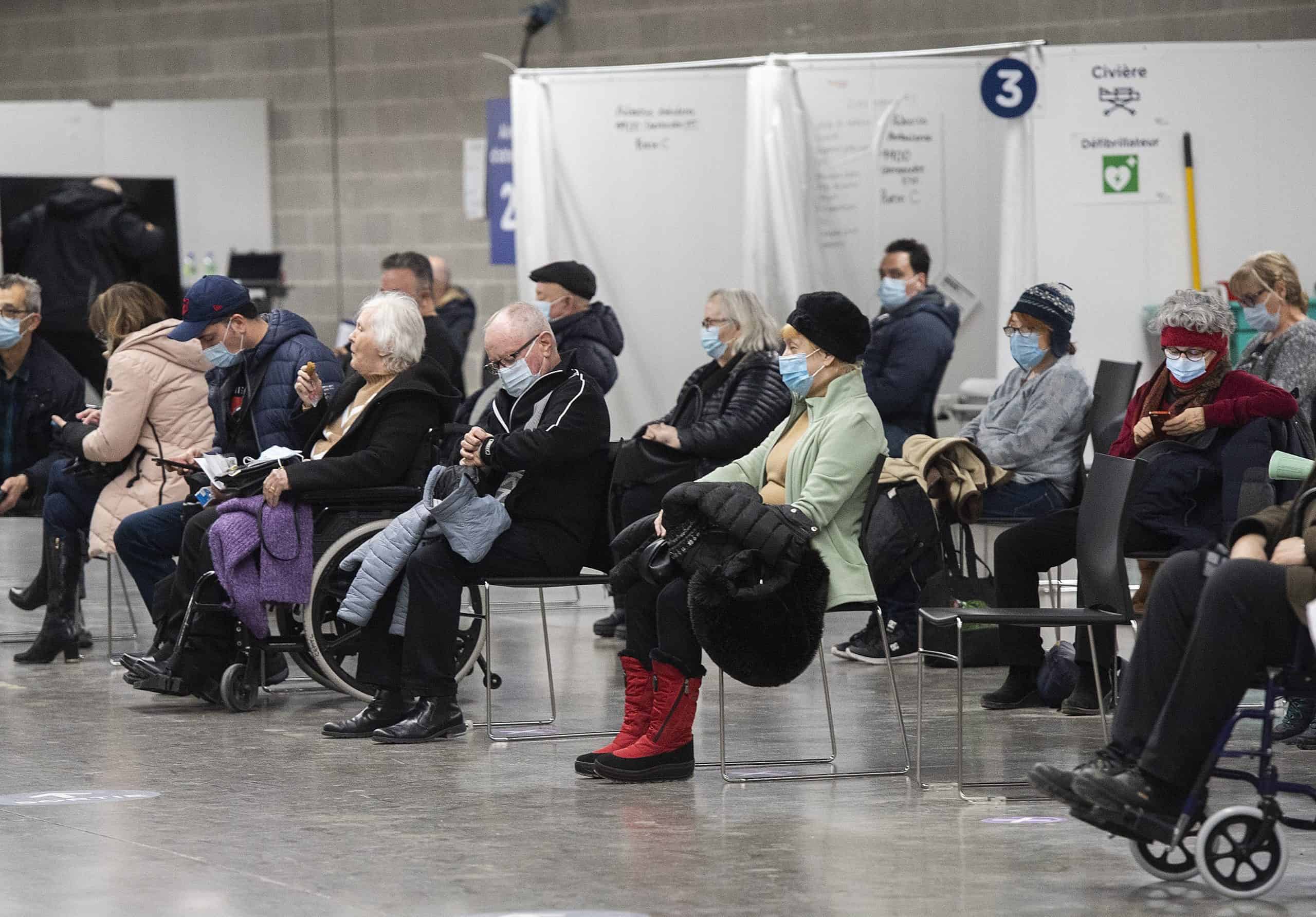 Even as some provinces have reported record-high daily COVID-19 case counts, health experts are warning the real infection rate is likely much higher, pointing out that data has been clouded by holiday delays and with hospitals and testing centres reaching their limits.

After taking the holiday weekend off, a number of provincial and territorial governments are set to resume their COVID updates today.

Yesterday, Quebec Health Minister Christian Dube announced some health workers who have tested positive for COVID-19 will be allowed to stay on the job. He said the move is necessary to keep the health-care system operational, and the decision would be made on a case-by-case basis under certain conditions.

Quebec reported 12,833 new cases and 702 hospitalizations, with 15 more deaths linked to the virus.

Manitoba and Ontario have said they are considering similar measures to avoid overwhelming their own health systems. Manitoba reported 825 new cases and five deaths yesterday, while Ontario reported 8,825 new infections.

Ontario also announced that beginning on Thursday, long-term care homes won’t accept general visitors or allow residents to leave for social reasons in order to avoid exposure to the virus.

Alberta Premier Jason Kenney and his U-C-P government are banking on oil and gas revenues and a more diversified economy to deliver more good news in 2022.

Political scientist Duane Bratt says the U-C-P is hoping it will also help it bounce back in popularity polls after a difficult 2021.

Bratt says the government struggled to get a handle on the COVID-19 pandemic, particularly the disastrous fourth wave in the fall.

Kenney declared the pandemic over in June and lifted almost all health restrictions.

COVID-19 then hit with a vengeance, forcing the cancellation of thousands of surgeries and pushing the health system to the brink.

The government also lost more than one-billion-dollars on the Keystone X-L pipeline and had to retreat on controversial files, including a proposed school curriculum and coal mining in the Rockies.

On the plus side, a strong economy helped cut the projected deficit to less than six-billion dollars from 18-billion.

WILTON MANORS, Fla. _ Sheriff’s deputies have arrested a suspect in a hit-and-run crash in South Florida that killed two children and hospitalized four more on Monday.

Officials say the man tried to pass a bus as it was pulling out to merge into his lane. The car cut in front of the bus and veered right, driving off the roadway into a sidewalk and driveway and hitting the children. The driver then took off.

Andrea Fleming, 6, and Kylie Jones, 5, died at the scene. Four other children were taken to hospital.

Physical evidence on the scene and other information led detectives to identify the vehicle involved which was then released among law enforcement agencies. It was later located in Wilton Manors.

Police said the vehicle had damage consistent with being involved in the crash. The front bumper was missing, which was located at the scene.

Detectives arrested Sean Charles Greer, who they say confessed to his involvement.

Greer is also currently on probation for burglary. It was not immediately known if he had a lawyer who could speak on his behalf.

BANDA ACEH, Indonesia _ Indonesian authorities said Wednesday they will push a boat containing 120 Rohingya Muslims back to international waters despite calls from the United Nations refugee agency to allow the passengers to disembark after being adrift for days off the country’s northernmost province of Aceh.

The boat is reportedly leaking and has a damaged engine, is floating in the open sea in harsh weather, and may be at risk of capsizing, the UNHCR said Tuesday.

“UNHCR is deeply concerned for the safety and lives of those onboard,” it said in a statement. “To prevent needless loss of life, we strongly urge the Indonesian government to allow safe disembarkation immediately.”

The boat was first sighted by local fishermen on Sunday in waters about 96 kilometres off the coast of Bireuen, a district in Aceh province, said Badruddin Yunus, the leader of the local tribal fishing community. He said fishermen were unable to tow the broken-down wooden boat but had provided food, water and clothes to the hungry passengers, including 60 women, 51 children and nine men.

“Their condition looks weak but fine,” said Yunus, adding that the refugees said they wanted to go to Malaysia and had been at sea for 28 days before their boat’s engine broke.

Local officials, supported by the police and navy, have provided food, medicine, a new boat engine and a technician to help repair the Rohingya boat, and they will push it back to international waters once it is fixed, said Bireuen district chief Muzakkar Gani, who also cited concerns that some of the refugees might have COVID-19.

Gani said local officials were still waiting for directives from the central government in Jakarta but in the meantime planned to repair the boat so the refugees could sail onward to Malaysia.

More than 700,000 Rohingya have fled from Buddhist-majority Myanmar to camps in Bangladesh since August 2017, when the Myanmar military launched a clearance operation in response to attacks by a rebel group. Myanmar security forces have been accused of mass rapes, killings and the burning of thousands of homes.

Parliament abolished the death penalty, except for the killing of prison guards or police officers, for a five-year trial period. The legislation was renewed in 1973, before hanging was totally abolished in 1976. Canada’s last executions were in 1962.

BOSTON _ “The Da Vinci Code” author Dan Brown and his ex-wife have agreed to settle a lawsuit in which she alleged he led a secret life during their marriage that included several affairs.

The couple agreed to voluntary dismiss the lawsuit and “any and all claims and counterclaims in this matter,” according to court papers filed Monday in a New Hampshire court.

“Blythe Brown and Dan Brown have reached an amicable resolution of their disagreements, and will have no further comment,” Blythe Brown’s attorney Harvey Wolkoff said in a statement. “They request that their desire for privacy and closure be respected.”

No further details on the settlement were provided.

In her lawsuit filed last year, Blythe Brown called her ex-husband’s behaviour “unlawful and egregious” and accused the bestselling author of secretly diverting funds to pay for gifts to an unnamed horse trainer.

Blythe Brown also claimed credit for inspiring much of his work and coming up with the premise for “The Da Vinci Code.” She also alleged that Brown hid scores of future projects worth “millions” from her, including a television series as well as a children’s book.

At the time of the lawsuit, Dan Brown said he was “stunned” by the allegations and called the complaint “written without regard for the truth.” He said he never misled his ex-wife on their finances during their divorce and that she ended up with half their holdings after they split up.

The couple divorced in 2019 after 21 years of marriage.

BEIJING _ China is calling on the United States to protect a Chinese space station and its three-member crew after Beijing complained that satellites launched by Elon Musk’s SpaceX nearly struck the station.

A foreign ministry spokesman accused Washington on Tuesday of ignoring its treaty obligations to protect the safety of the Tiangong station’s three-member crew following the July 1 and Oct. 21 incidents.

The Tiangong performed “evasive maneuvers” to “prevent a potential collision” with Starlink satellites launched by Space Exploration Technologies Corp., the government said in a Dec. 6 complaint to the U.N. Committee on the Peaceful Uses of Outer Space.

The United States should “take immediate measures to prevent such incidents from happening again,” said the spokesman, Zhao Lijian.

Zhao accused Washington of failing to carry out its obligations to “protect the safety of astronauts” under a 1967 treaty on the peaceful use of space.

The first module of the Tiangong was launched in April. Its first crew returned to Earth in September following a 90-day mission. The second crew of two men and one woman arrived Oct. 16 for a six-month mission.

This report by The Canadian Press was first published Dec. 29, 2021.