Could Some People Pay More for Transit in the Future?

If you're taking public transit, doesn't it make sense to use Presto to pay for your trip, no matter if you're traveling from Burlington all the way to Scarborough?

Unfortunately, that is not the current situation today. According to Metrolinx, there are currently 11 different ways fares are determined across the GTHA, with each service provider setting their own rules and prices.

This map shows those different jurisdictions below: 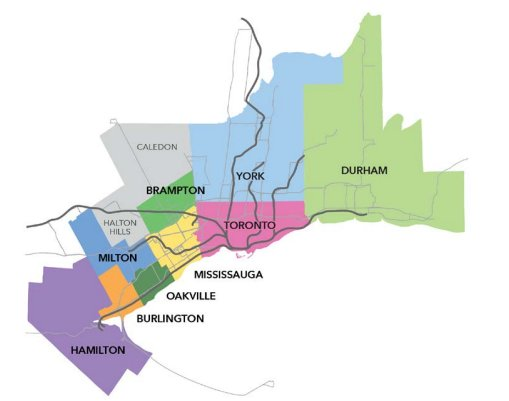 You can see that west of Toronto it's a bit of a more scattered approach, with five different transit systems operating in Mississauga, Brampton, Oakville, Burlington and Milton, although most of the transit systems on this map have adopted the Presto Card.

But such a patchwork of transit systems is difficult for anyone to navigate through, considering how each area prices trips differently. Some have said it would be better if the system was based on the distance one travels during their daily commute.

However, there is some pushback on that idea. The Toronto Region Board of Trade issued a paper on how they oppose a 'blanket fare-by-distance' model for an number of reasons.

But although the Toronto Region Board of Trade opposes this idea of a transit fare measured by distance, they do propose alternative solutions.

The first idea is the province should be divided into fare zones and permit a fare zone buffer. Fare zones are used by many international cities (such as Amsterdam, Melbourne, Manchester, Hamburg and London) as well as Montreal. They work by increasing riders' fares slightly with every zone crossed after the first.

Specifically, a "2 for 1" deal on fare zones would work in the GTHA. With this approach, transit riders could travel across two moderately-sized zones, even crossing municipal boundaries, without incurring a fare increase. Travel to a third, fourth and fifth zone would trigger incremental fare increases to reflect the cost of the distance travelled.

Hypothetically, this would allow flat fare travel on existing networks between areas such as Brampton and Mississauga, or Kennedy station in Scarborough and downtown Toronto, since they'd be within at least one zone without having to go into another.

Another idea is to have lower transit fares for surface transit vehicles such as streetcars and buses, whereby the slower the transit journey, the less it costs riders…and vice versa. The reasons behind this idea is it would maximize existing transit usage (since Toronto already has buses and streetcars), buses are the most accessible form of transit for lower income residents and studies showing the best way to boost ridership is by increasing use of bus capacity.

As the need and demand increase, there has to be a better way to pay for taking transit that doesn't break the bank but fair at the same time for those traveling from farther away.

What do you think of these ideas?