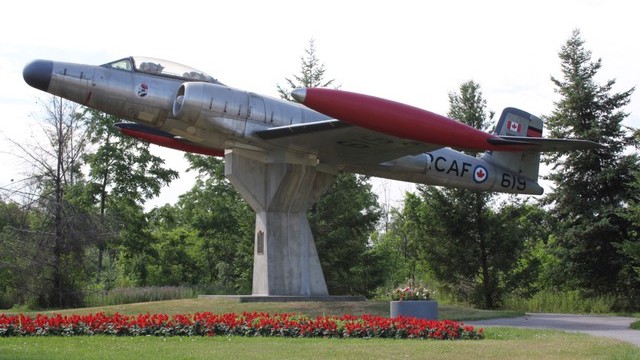 Although most people associate Mississauga’s Malton neighbourhood with Pearson Airport, there’s another aspect of aviation that it’s been known for for some time–the CF 100 aircraft monument that’s been an important part of the community for decades.

Recently, a well-placed source reached out insauga.com to say that recent discussions with leaders and members of the community have revealed that the iconic structure might be removed in the near future.

According to the source, there are concerns about the structural integrity of the monument and the natural deterioration that’s occurred over time.

While it is important for officials to monitor any structural issues and act on safety concerns, it’s also fair to say that removing the aircraft entirely will upset–perhaps deeply–members of the community who have grown attached to the structure. Not only is the monument visually appealing, it pays tribute to Malton’s aviation heritage.

According to Heritage Mississauga, The A.V. Roe plant in Malton produced the Jetliner–North America’s first jet passenger plane–in 1949. By 1953, workers at the aircraft and engine plants were producing the CF100 all-weather jet interceptor for the Royal Canadian Air Force. Heritage Mississauga also notes that the plant designed and built the CF-100 (also known as the Canuck). That prototype flew for the first time in 1950 and in order to honour the community’s contribution to the industry, the Malton Legion raised one of the few remaining CF-100s in 1972.

That aircraft–which the community could lose–is the one that sits on the pedestal in Paul Coffey Park (formerly Wildwood Park).

To be fair, it does appear that leaders are open to re-locating the monument. That said, there do not appear to be any plans to repair or enforce the existing structure at this time, so removal is the most likely outcome.

We will keep you posted on details as the story develops.