Could Mississauga End Up Paying for A Caledon Monorail? 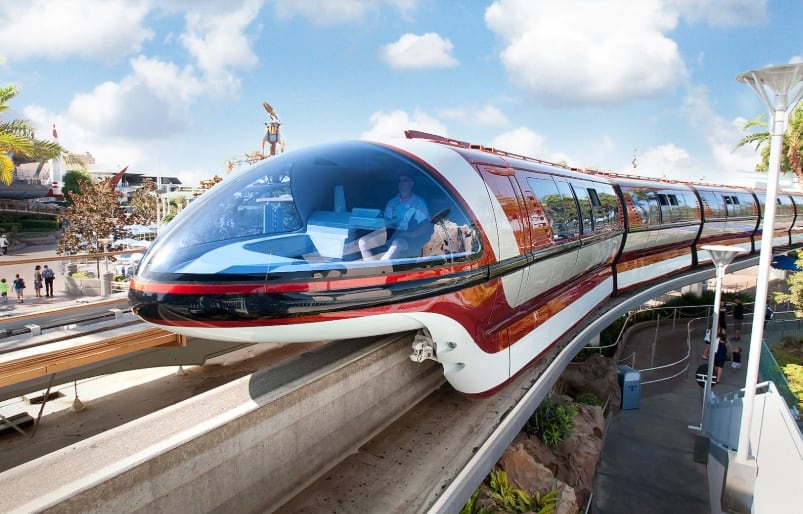 For once, this story does not involve the two Peel mayors that have been in the headlines as of late: Brampton’s Patrick Brown or Mississauga’s Bonnie Crombie.

Rather, it’s the one who heads up Peel’s third municipality: that 70,000 populated little place known as Caledon. When we think about Caledon, most of us in the other two Peel cities and beyond envision driving up there on a nice weekend to go hiking or visiting the Cheltenham Badlands.

Even for those living in the town, it’s not often to associate the idea of public transit with Caledon. Most people in town get around by driving, and Caledon only has the Bolton GO station, which is really only a bus station. Other than that, there is no higher order transit in the rest of the town.

During a recent town council meeting, Caledon councillors were presented with a report from a transportation planner exploring various transit options for Caledon. Last year, an initial presentation was given for a “Made In Caledon” approach when it comes to providing public transit services, examining future demographic changes, conditions, levels of services and comparison with other similar municipalities.

A series of public meetings were held back in March and it is expected that the study completion will be around Spring of 2019, with yearly update to follow to officials on the status of any new transit developments within Caledon.

Some of the stats shown were that most trips by residents stay within the town but most people commute outside of town to work. Below is a graphic showing where people in Caledon were heading based on the community in town they lived in.

One in five residents would be likely to use transit within Caledon and outside and 62 per cent of residents would support a 20 to 40 per cent increase in household property taxes to pay for it.

Some of the conceptual options for transit service centred around three main centres of Caledon: Mayfield West, Bolton and Caledon East. 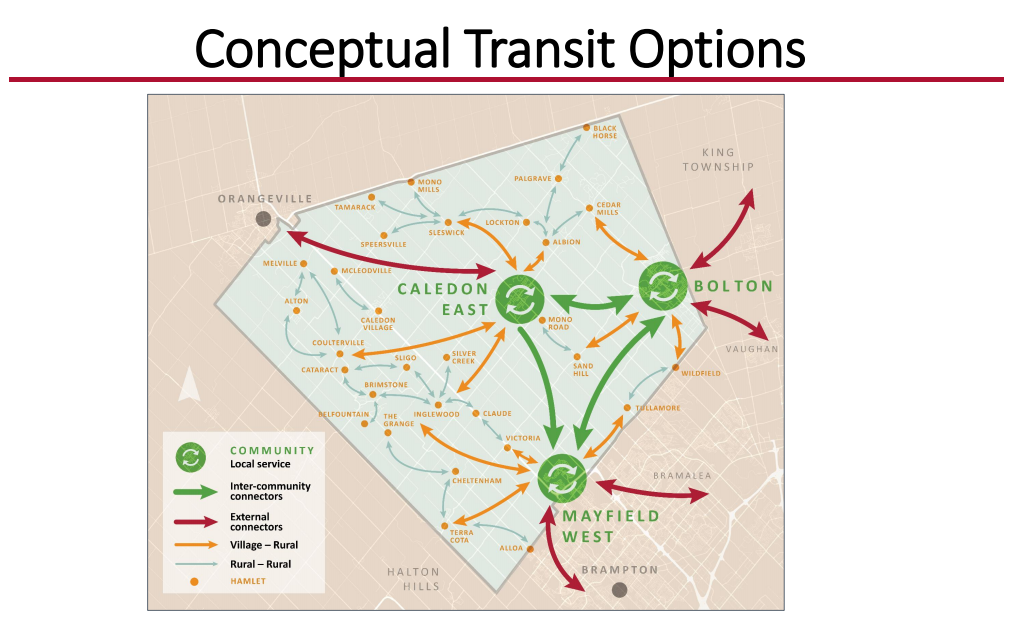 The presentation then showed detailed transit options throughout Caledon, centred near Mayfield West and Bolton. 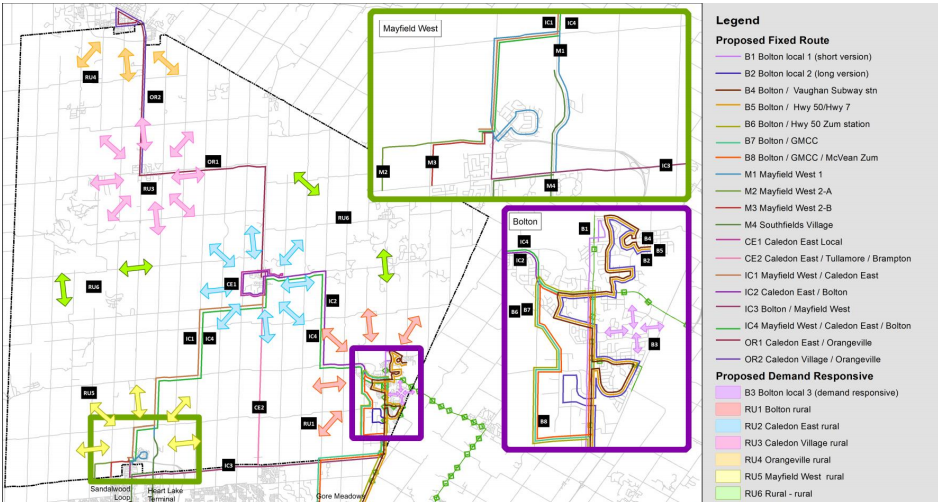 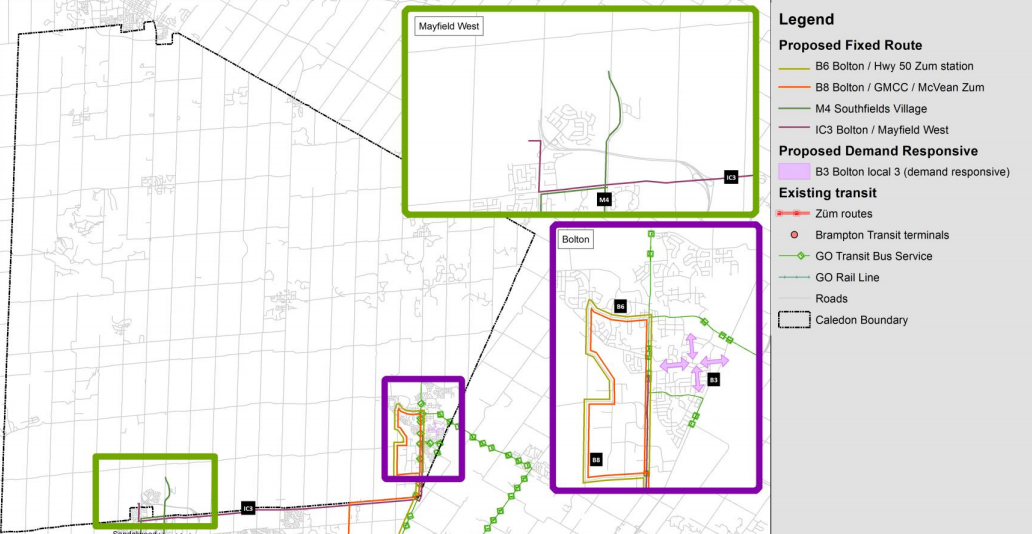 Looking at transit options couldn’t happen sooner for this third partner of Peel Region that is substantially smaller in population compared to Brampton and Mississauga, both of whom are approaching 1 million residents.

But something that was said really stuck out during that council meeting that gives the impression that Caledon’s leaders may be ‘thinking outside the box’ way too much. Responding to one of the councillors talking about possibly extending the Hurontario Light Rail Transit to Caledon, Mayor Allan Thompson said perhaps the town should be looking at “something that has been implemented well across Canada,” and that was monorail.

“Critics say monorail doesn’t move people. Well, look at the small monorail system Disney has and on average they move almost half a million people everyday, so maybe that’s something we can consider going forward” Thompson continued, saying it would be cheap to build and there won’t be much tying up of real estate assets…because a monorail can run over buildings.

So just to be clear, Thompson is comparing his humble little hamlet, the entire population of which can fit into one Mississauga city council ward, to one of the most frequently visited tourist attractions in the entire world.

Naturally, online reaction to this bold proclamation was just as eye-widening. Brampton resident Sylvia Roberts, better known as Brampton’s recorder, said this might be an example of the increasingly untenable situation that is the current governance structure of Peel. 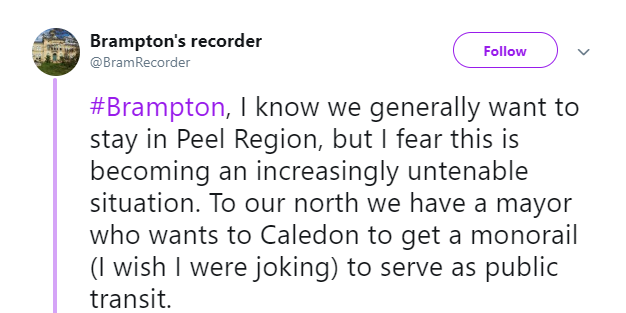 Here’s another person who opines frequently on transit and urban affairs:

My god. Caledon’s mayor wants to look at building a monorail.

Lastly, the obligatory comparison to the doomed Springfield monorail from The Simpsons.

The mayor of my hometown of Caledon, Ontario wants staff to consider a monorail as part of future transit options… https://t.co/pPVk5BWZ8r pic.twitter.com/VMihOWWJJE

No Lyle Langley sticking his nose into Caledon affairs. In this case, who needs a Lyle when they have their own mayor touting this silly idea?

Having more flexible bus services, fine. But a monorail because you think Caledon could be the next Disney? And you wonder why Mississauga wants to leave Peel Region.

Perhaps people in Brampton should reconsider defending the status quo.