Could Another Crombie Run for Office in Mississauga?

Mississauga’s incumbent mayor may not be the only one named Crombie who could make a run at elected politics should he so choose.

Brian Crombie, the husband of Mayor Bonnie Crombie, has been touted as a potential candidate for MPP in Mississauga Centre by an entity called the None of the Above (NOTA) Direct Democracy Party. Crombie is currently acting chief financial officer for the Ottawa Senators as well as operating his own firm, Crombie Capital Partners.

Crombie's career took a downward turn at one point, when almost a decade ago he and two other employees at pharmaceutical giant Biovail were forced to pay fines as part of a settlement to the Ontario Securities Commission, after admitting to violating provincial securities laws.

But that has not stopped Crombie from pursuing other business ventures and frequently speaking out on policy issues such as public transit and the arts; He served as a former president of the Mississauga Arts Council.

In the current political environment with four parties (Liberals, Conservatives, Greens and NDP) dominating the conversation, you might think running for a fringe political party would be a suicide mission. But it seems a poll that was recently commissioned by the NOTA shows that, in Mississauga Centre at least, there could be an opportunity for change other than from red to blue and back again. 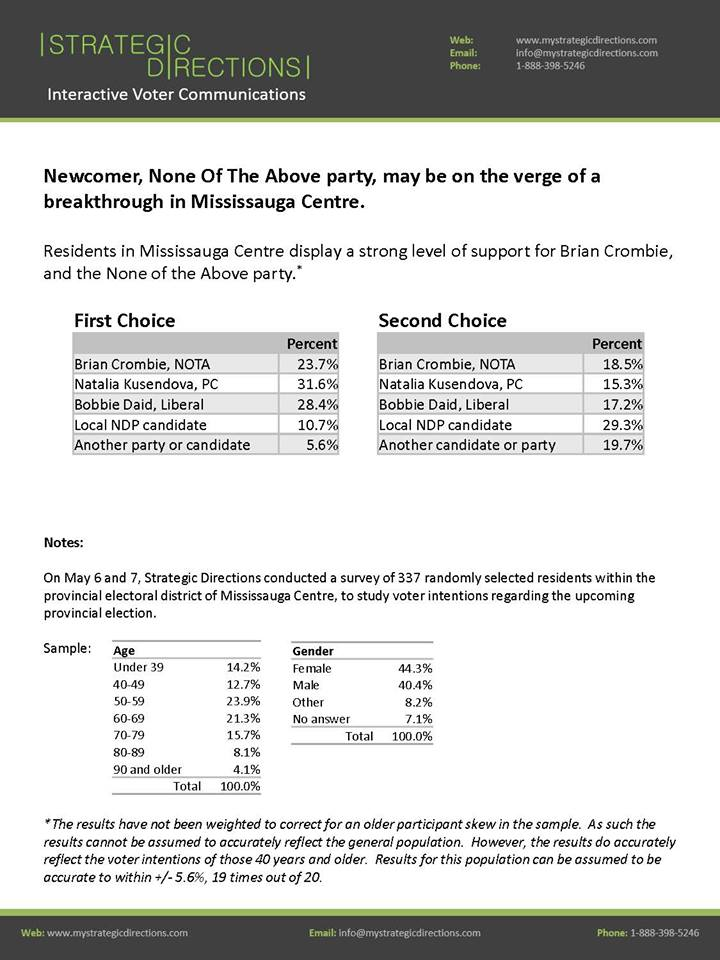 The NOTA party sent out a press release saying, "the poll shows he (Crombie) would start within reach of the two leading candidates with no media or public knowledge of his candidacy and little for the party so far in the election cycle."

"With a minimal campaign, it is very likely he could win the riding overwhelmingly to become one of the first NOTA Party candidates elected in Ontario since the None of the Above Party was started after the beginning of the 2014 election," the release concluded.

Those expectations sound wildy optimistic. But while PC candidate Natalia Kusendova is shown to be ahead with 31 per cent support, with Liberal candidate Bobbie Daid not far behind, the surprising number is Crombie at third place, ahead of the NDP or Greens, with 23 per cent running as a potential NOTA candidate.

Most likely Crombie would siphon Liberal votes away from Daid. Even with second choices, Crombie's numbers do pretty well (at 18 per cent), although the NDP has the highest support for second choice with 29 per cent.

The poll does note in asterisk that their sample reflects voting intentions of mainly those over 40, and as such do not accurately reflect the general population.

However, if we buy into the assumption that more older people tend to vote than so-called "millennials", then these numbers would be reflective enough of those who are confirmed to vote in the June election.

Crombie said he had no comment in two separate inquiries insauga.com made to him regarding a potential candidacy. but it appears that steps have been taken to formalize him being allowed to run. The NOTA party posted via social media a candidate nomination form with Crombie’s name on it (address and contact info have been redacted for privacy reasons):

Party leader Greg Vezina also put on his Facebook page 35 signatures nominating Crombie to be a candidate in Mississauga Centre. The deadline to file to run in the June election is Thursday, May 17 at 2 pm.

We’ve already seen enough political turmoil in both Liberals and Conservatives regarding their candidate selection process, but throwing in an independent candidacy that started off with almost a quarter of support would have thrown this race wide open.

UPDATE: Crombie ended up declining to run, stating it was a personal decision. Still it would have been interesting to see what would have happened.

Once destroyed by fire this restaurant is now reopening in Mississauga
Naan & Kabob is returning to Mississauga, just under four years after losing a location in a fire that engulfed an entire plaza.
END_OF_DOCUMENT_TOKEN_TO_BE_REPLACED