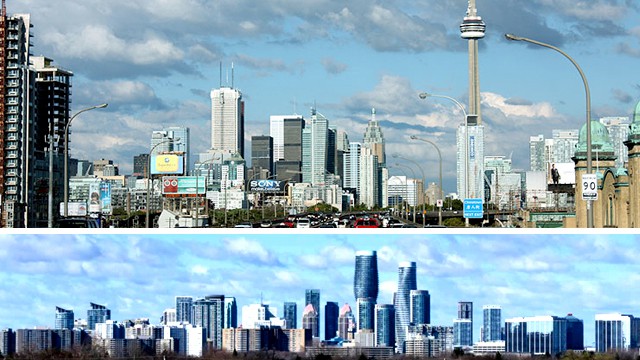 While Mississauga is a great place to live, life can get expensive here.

Recently released data from the Toronto Real Estate Board (TREB) revealed that detached homes in Mississauga are selling for an incredible $928,414 (and this number has climbed almost every month). In September, we released an article that suggested, based on data compiled by Numbeo, that the average person who lives in the city should expect to pay about $2,088.59 a month to get by comfortably.

While we know Mississauga can be costly, we also know that it’s typically a little more affordable (especially when it comes to real estate) than our big and bustling neighbour. That said, how do Mississauga prices compare to those found in Toronto?

We cobbled together some numbers from Numbeo (a website that uses crowd-sourcing to compare living costs in various cities) to give you a general idea of how much it costs to live and play in Mississauga vs. Toronto.

While Mississauga has a growing, diverse and commendable food scene, it doesn’t have quite as many restaurants as Toronto and the ones it does have tend to be more affordable. According to Numbeo, two people can eat at a mid-range restaurant in Mississauga for $55. In Toronto, the same dinner at an equivalent restaurant will cost about $75.

Mississauga residents also seem to save a little on drinks, paying $5 for domestic beer (Toronto diners pay $6) and $6 for imported beer (in TO, you’ll pay about $7).

While that sounds discouraging, at least you’re paying a little less for wine ($13.50 instead of the $14 your TO neighbours are dropping).

If you live, work and play in Mississauga, there’s a good chance you’re driving. If you own or use a vehicle regularly, you are saving a little more than drivers in TO. According to Numbeo, Mississauga residents pay about $1.02 for a litre of gas while Toronto drivers pay about $1.03. You might also be saving if you’re purchasing a car, as a Toyota Corolla will cost you about $20,895 in Mississauga (vs. $22,500 in Toronto).

In terms of utilities, Numbeo data suggests Mississauga residents pay more. If you live in a condo/apartment in Sauga, your basic utilities (electricity, heat, water, garbage, etc.) cost you about $220.83 a month. If you live in Toronto, those same services typically cost about $125.86.

If you want to save on housing expenses, Mississauga remains a good alternative (for the most part) to Toronto. If you’re renting a one-bedroom apartment in City Centre, you’re paying somewhere in the neighbourhood of $1,385. If you were living in a one-bedroom in an equivalent area in TO, you would be paying about $1,549.01. Outside of City Centre, a one bedroom will cost you about $1,088.89 (a TO equivalent would be $1,146,85).

So, it looks like it’s cheaper to live in Mississauga when it comes to rent, transportation and dining. If you’re looking to save on groceries and utilities, well, Numbeo data suggests that you’re a little less likely to do that here.