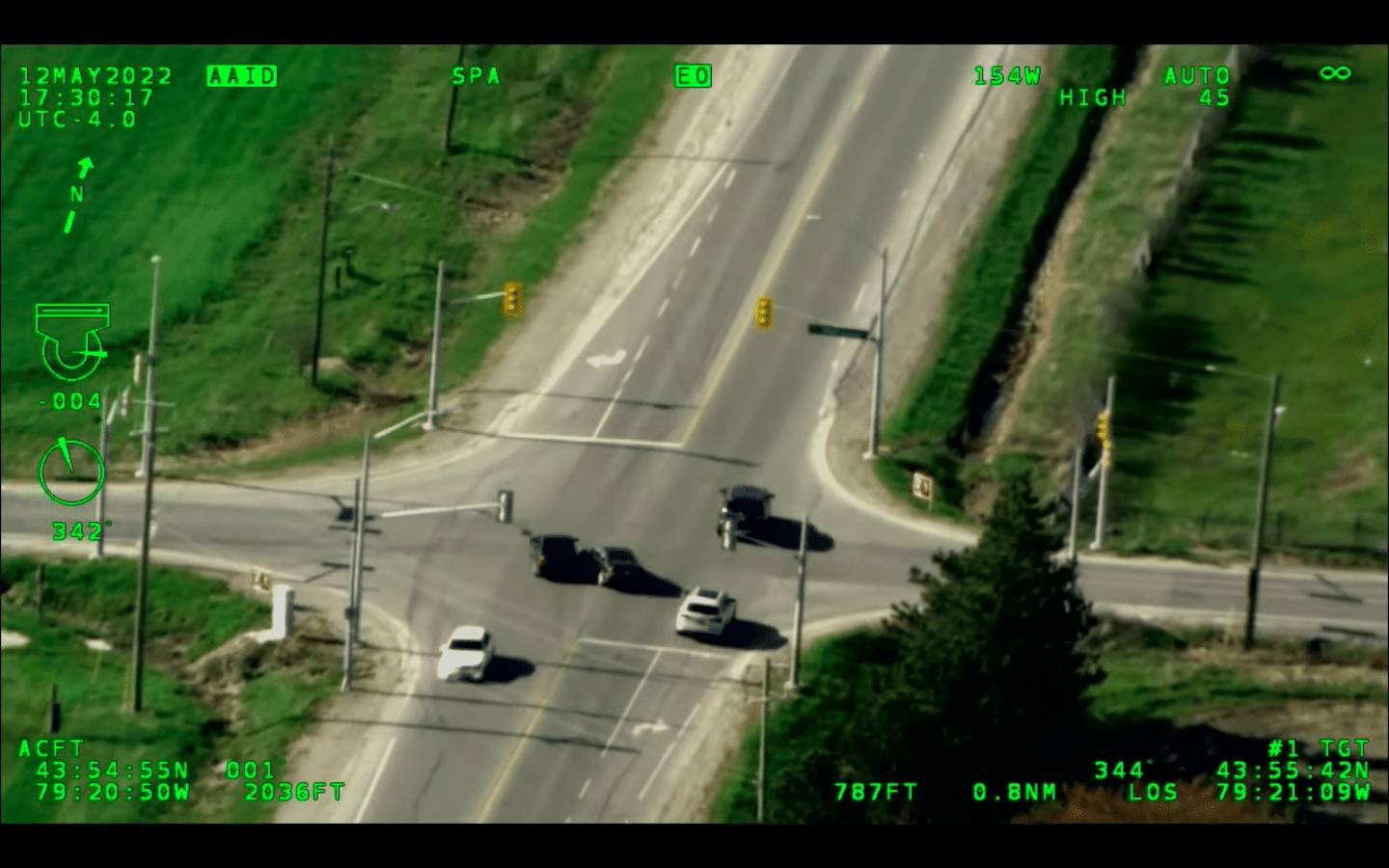 YRP's Air 2 helicopter caught this near-miss as the driver ran a redlight almost striking another car head on underscoring the importance of Project ERASE.

The project involves Durham’s Air 1 and York’s Air 2 helicopters, which will patrol the GTA skies in search of cars kicking off a race, driving dangerously or speeding.

The choppers work in conjunction with officers on the ground to spot dangerous driving, track the driver and coordinate a response. Officers will also be on the lookout for cars on the road that don’t meet safety standards.

Today we join our GTA police traffic partners as we kick off Project #ERASE . We are asking for community support to help us combat aggressive driving everywhere. We will be using Air1 and other tools to combat racing and aggressive driving on our roadways. pic.twitter.com/ue9xIzpGYj

“Street racing has no borders, and neither do officers across the province who are working together to E.R.A.S.E this issue,” said YRP.

Just weeks before the project’s launch, one 19-year-old underscored the importance of this initiative. On May 12, Air 2 spotted the man doing donuts in a Vaughan industrial area near Killaloe Rd and Hwy 7.

In the footage obtained by Air 2, the man’s black sedan can be seen whipping around a paved area with another person standing mere feet aways. He then takes to the highway, passing a motorcyclist on by driving up the shoulder the on-ramp.

“Looks like he’s gonna run,” an officers said in the recording, “so don’t even try.” The chopped continues following the car south as the driver weaves among traffic and races up the shoulder at speeds higher than 180 km/h through a construction zone.

He proceeds through a busy intersection, running a red light and cutting off oncoming traffic as other drivers try to turn. He continues to run multiple red lights as he travels weaving between cars and almost causing multiple accidents.

After an hour of reckless driving, the man arrived at a townhouse complex and parks underground. The YRP Canine Unit responded to the lot and saw the man bolt into a surrounding forest on foot. They arrested the man a short while later.

This 19-year-old with the need for speed put hundreds of lives at risk on May 12. pic.twitter.com/hrLPbny1Wu

As a result of going for his rip, he was charged with flight from police, dangerous driving, stunt driving, driving without license plates, driving while using a phone, failure to stop at a red light and breach of probation.

His license was suspended for 30 days and his car impounded for two weeks.

The driver’s “need for speed put hundreds of lives at risk,” YRP said, “This driver won’t be the last, as YRP and partners prepare for our yearly mission to eliminate racing activity on streets everywhere.”

Police will be out across the GTA all summer working to stop this kind of driving.