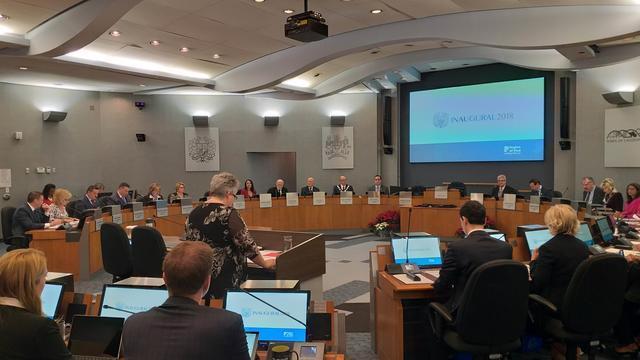 EDITOR’S NOTE: The above photo was taken circa 2018, prior to the COVID-19 pandemic

This might be one of those situations that few people who live in Peel Region know about, but it looks like Peel Regional Council has finally, after several years of trying, pulled off the impossible.

Barring unforeseen circumstances, Brampton will get more seats at the table–by taking them from Caledon.

During the Nov. 26, 2020 council meeting, councillors passed a resolution to increase Brampton’s representation by taking two seats from Caledon, boosting the Brampton contingent to nine councillors.

That leaves Caledon with three councillors but keeps Mississauga at its current number of 12, meaning Mississauga would retain 50 per cent of the voting power. Public meetings would be required to layout the proposals.

In the past, there have been attempts by Brampton to get all their elected councillors to sit at the Region just like Mississauga. This current motion boosting their representation up to nine was an acceptable compromise according to Brampton Mayor Patrick Brown, who moved the motion which was seconded by Mississauga councillor Carolyn Parrish, a proponent of reducing Caledon’s regional representation.

Parrish was very happy with the results, which now requires a triple majority of the lower-tier municipalities to pass. “Regional council must vote for it, which it has. 2 of 3 lower tier municipalities must vote for it. Which they will. And the municipality with more than half the population of the region must approve. That’s Mississauga. And we will,” Parrish added in a subsequent tweet.

Unsurprisingly Caledon councillors were not happy with this result, judging by their comments during the meeting and this press release from the town afterwards.

“This surprise motion is unacceptable,” said Caledon Mayor Allan Thompson. “Representation on Council is important. This discussion warrants greater respect than a walk-on motion. If there are problems of representation to be addressed, they can’t be at the expense of diminishing Caledon’s voice on the Regional Council. We are going to continue to play a bigger role economically for the region and in the Greater Toronto Area. Now more than ever, we need effective representation.”

Thompson sounded less diplomatic during the meeting, calling the entire situation ‘dirty pool’ while shouting at Brown and Brampton councillor Martin Medeiros. Another Caledon councillor, Jennifer Innis, tried to use the familiar refrain that “we are in a global pandemic’ to try to defer the matter for later discussion, imploring ‘more time was needed.”

However, the votes were not unanimous from Caledon. Annette Groves, a regional councillor who represents the Bolton area, said that ‘walk on motions were very common’ on her local council and that they frequently disadvantaged Bolton. Groves, a former Caledon mayoral candidate, voted in favour of the motion to give Caledon’s two seats to Brampton alongside all of Mississauga and Brampton’s contingent.

But perhaps the most ridiculous assertion came from that Caledon press release, saying that “Caledon represents 56 per cent of the landmass in Peel.” While Caledon is likely going to increase to 100,000 in population, that isn’t going to happen at least until 2041–another 20 years from now.

The idea that land is somehow more important than, say, the people living on it, is a point that makes more sense in 1820 and not 2020.

Caledon held a special council meeting at 6 pm on Nov. 30 to discuss this matter further. But suffice it to say, if you only need two of the cities to pass this motion, the die is cast.

If you think Doug Ford is going to swoop in and save the day for Caledon, as the Premier has been known to frequently meddle in municipal affairs from his perch at Queen’s Park, let’s remember that the resolution only reassigns existing seats. Regional Council is not increasing from its current 24 members. Mississauga specifically demanded not to add more politicians for themselves.

There is little incentive for Ford to intervene, even if Caledon councillors start calling their MPP, provincial solicitor general Sylvia Jones. Besides, I have a simple solution that actually falls in line with the “making government smaller” argument, something that Ford is always in favour of. It’s a cumbersome system, and the idea of a select group of elected insiders being allowed to pick another member to sit at a body that was duly elected by voters leaves a sour taste.

If Brampton’s original intent was to copy Mississauga’s model, then they can do a ward boundary review and divide the city into eight wards. Each ward will be represented by one elected person, who will sit as a city and regional councillor. Adding the mayor makes that nine.

In effect, Brampton would be cutting the number of councillors from ten to eight, but after spending many years trying to get ‘equal representation’ around the council at Peel Region, you’d have to be incompetent to let this golden opportunity slip between your fingers. Instead of electing a town and regional councillor the way Brampton does now, Caledon should move into a model where they elect a mayor and then voters will also elect two regional councillors to represent the entire town. You can have a list of people running, and the top two vote-getters will win the regional seats.

Caledon said they were in the middle of conducting their own ward boundary review. This model would not interfere with that process; the town can decide how to redraw their wards the way they see fit. Municipalities have until December 2021 to get something passed, along with revised ward boundaries, in time for the 2022 municipal election which is what they were aiming for.

But Mayor Thompson let out a rather ominous note as the meeting concluded, “if this is the way Caledon is being treated, I don’t know what we’re doing here.”

Could the spectre of regional separation rear its head again…but this time with a Calexit instead of the Missexit from Peel?