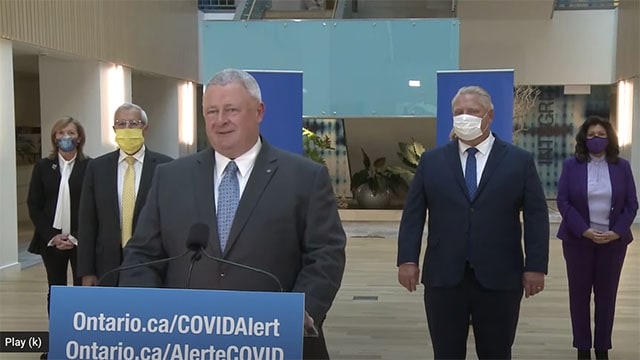 On Oct. 16, provincial and city officials appeared alongside Ronnie Miller, the president and CEO of Roche Pharmaceuticals Canada, to announce a new investment that’s expected to create about 500 new jobs in Mississauga over a three-year period.

At the press conference, Miller announced that Roche plans to invest $500 million over five years to establish a Global Pharma Technical Operations site to oversee its global supply chain in Mississauga.

“This investment is further proof that Ontario has the best environment for jobs and opportunity, and that we are leaders in the creation of life-saving medicines, treatments, and medical equipment,” said Ford in a statement.

“Roche’s new operation hub in Mississauga will further anchor Ontario’s position as a titan in life sciences, creating good-paying jobs in the community, and ensuring Ontario’s best and brightest minds advance the important work Roche does to transform health care here in our province and beyond.”

The province says the new site will be responsible for supporting Hoffmann-La Roche Limited’s global manufacturing and supply chain operations. In 2012, Roche Canada established Mississauga as a product development site, overseeing clinical trials both in Canada and globally. The Ontario government says province won out over 12 international locations and Roche sites to secure the new investment.

According to the province, Roche is the world’s largest biotech company and a world leader in oncology, immunology, infectious diseases, ophthalmology and diseases of the central nervous system.

“I want to thank Roche for this significant investment in our city that will not only create hundreds of highly skilled jobs but position Mississauga on the road to recovery,” said Mississauga Mayor Bonnie Crombie in a statement.

“As home to Canada’s second-largest Life Sciences sector, I couldn’t be more proud that Roche has chosen to expand its operations in Mississauga. This investment will help bring new innovative products to patients in Canada and around the world and is yet another example of how innovation thrives in Mississauga.”