Companies Are Getting Less Popular Except These

If business is a popularity contest then everybody is losing; except for a seemingly invulnerable few like Google. After all, it’s scary to think what life would be like without Google.

According to the 2018 Canada RepTrak survey, Canadians’ trust in businesses has dropped significantly in the last year but the most reputable companies seem immune to the trend.

Despite controversies with companies in its sector, specifically Facebook, tech giant Google held the top spot in the 2018 rankings of Canada’s most reputable companies. 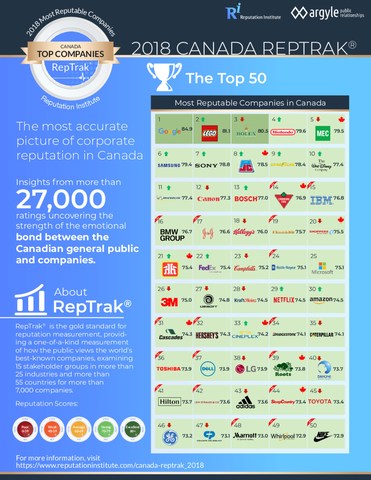 “While Canadians’ trust in companies has dropped nine points in the past year, the most reputable companies of 2018 are those that balance performance with purpose, conquering our hearts and minds by living up to their brand promise,” said Bradley Hecht, Senior Managing Director for the Americas at the Reputation Institute.

The survey is based on 27,000 individual ratings from Canadians and is the largest survey of its kind. It was conducted in January and February of 2018 and tracked more than 250 companies.

Two Canadian retailers, Roots and Canadian Tire, saw their reputation scores soar by 5 and 4.5 points respectively because of their social responsibility.

But 2017 wasn’t kind to one major Canadian company - Tim Hortons saw their reputation fall by 5.7 points going from 13th to 67th overall in the rankings.

“Authenticity really matters to Canadians, and we judge companies harshly when we don’t believe they live up to their stated values,” said Daniel Tisch, President and CEO of Argyle Public Relationships. “The most reputable Canadian companies are almost nine points higher than their peers in perceptions of their corporate social responsibility - and it’s not surprising that they are widely perceived to be more genuine.”