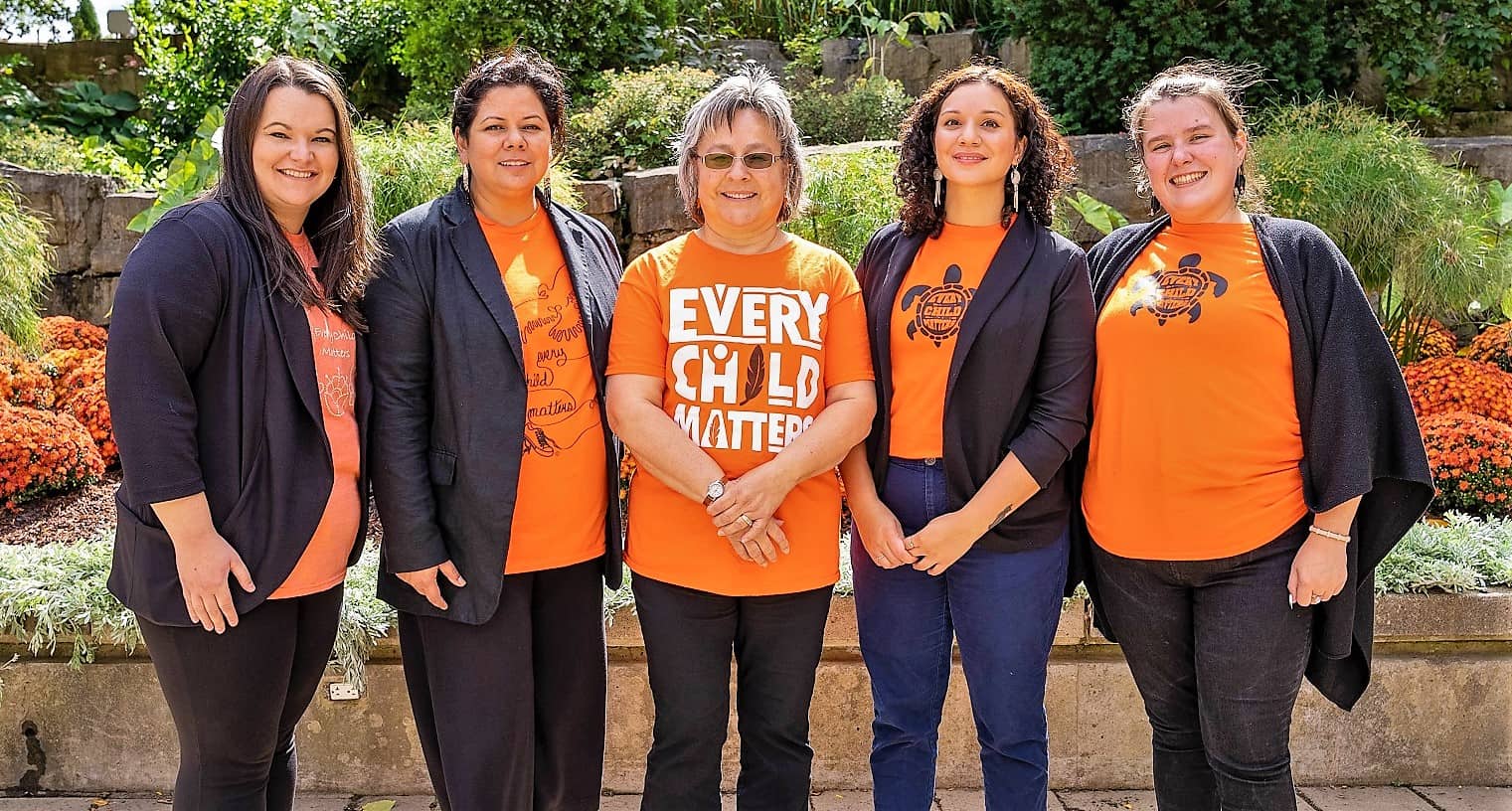 It’s one thing for educational institutions to commemorate Orange Shirt Day on September 30, the National Day for Truth and Reconciliation for the Indigenous community.

It’s quite another to have the actual founder and ambassador of the Orange Shirt Day movement, Phyllis Webstad, show up on campus. But that’s precisely what happened yesterday (September 22) at Niagara College.

Webstad’s story is now well-known. She was a student at the St. Joseph’s Mission Residential School in Williams Lake, B.C.

On her first day of classes at the residential school as a six-year-old girl, Webstad wore her shiny new orange shirt, bought for her by her grandmother to school. The shirt was instantly taken from her by the school.

In the past decade or so, the movement has really taken flight with Canadians coast-to-coast donning their “shiny orange shirts” on September 30 to show support, particularly after the graves of countless unknown children were found at the schools in the past two years.

Webstad landed at Daniel J. Patterson in Niagara-on-the-Lake to share her story with students, staff and faculty – many were clad in orange as a show of support.

“As a long-time supporter of Orange Shirt Day, we were thrilled to welcome Phyllis to Niagara College to share her powerful messages with our College community,” said college President Sean Kennedy.

“Phyllis inspires us to open our minds and our hearts – to strive to learn more about the devastating impacts of the residential school system in Canada, to consider new perspectives, and to continue engaging with truth and reconciliation initiatives, while honouring residential school victims and survivors.”

Webstad spoke to students and staff about the impacts of the residential school system in Canada and the origins and importance of Orange Shirt Day, which coincides with the National Day for Truth and Reconciliation later this month, even reading an excerpt from one of her books, “Beyond the Orange Shirt Story.”

“It didn’t matter how much I protested or told them I wanted it back.  They didn’t’ listen. This was the beginning of that feeling like I didn’t matter,” she said.

That same feeling went on to inspire the slogan, “Every Child Matters,” which will adorn many shirts on September 30.

“That’s where ‘every child matters’ comes from …  we could be sick, hungry, lonely, sad, and it didn’t matter, our feelings didn’t matter,” said Webstad, who pointed out that today’s survivors are now adults and elders, “but they were children then.”

There were 140 federally-run residential schools in Canada that operated between 1831 and 1998. The last school closed less than 25 years ago. 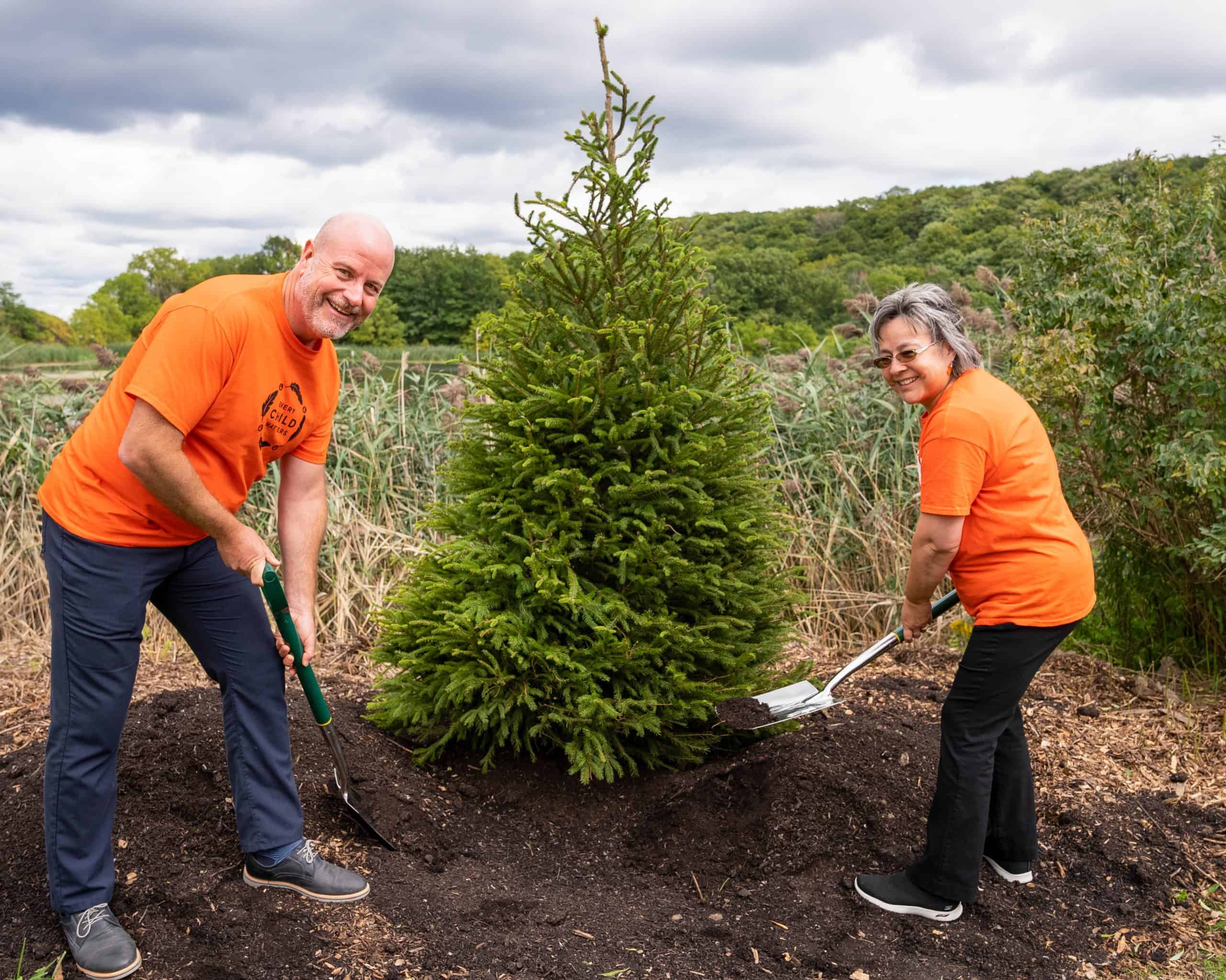 President Sean Kennedy and Phyllis Webstad participate in a tree planting at the Indigenous Garden (Daniel J. Patterson Campus in Niagara-on-the-Lake), where a Norway spruce was planted in honour of Webstad’s visit.

Jamie Consoli, Niagara College Indigenous Counsellor, Health, Wellness and Accessibility, was instrumental to Webstad’s visit to the school and spoke at the event. Consoli said she was excited and honoured that Webstad reached out with an interest in visiting the college.

“Not only has her story has inspired so many, but it is a conversation starter to spread awareness on the impacts of the residential school system,” said Consoli. “As Indigenous faculty at Niagara College, the opportunity to meet her and hear her speak is one in a million.”

The scholarship was initiated by Indigenous Education at the college as a tribute to Webstad’s momentous visit and her important work through the Orange Shirt movement. “It is intended to recognize Webstad’s name as well as her story of strength and resilience, which have not only inspired the community to give, but will be meaningful for future scholarship recipients.”

“Thanks to the Dr. Phyllis Webstad Indigenous Scholarship, more Indigenous students will receive the support they need to achieve their dreams,” said Kennedy.

“We are proud to name this scholarship in Phyllis’ honour, in recognition of her tireless pursuit of truth and reconciliation for the Indigenous peoples of Canada through the Orange Shirt movement.”

The scholarship announcement was well received by Webstad, who thanked the college.

“It was education that got us into this mess and education will get us out of it,”  said Webstad, paraphrasing a quote from Truth and Reconciliation Commission Chair Murray Sinclair, regarding education being the key to reconciliation.

While an initial fundraising goal was set for $20,000 to launch the scholarship, total funds raised exceeded expectations at more than $41,000. Contributors include CIBC, Scotiabank, Niagara Community Foundation, United Way Niagara, OPSEU Local 242, and individual donors from the community.

Kennedy said fundraising is still underway, with a goal to grow the Dr. Phyllis Webstad Indigenous Scholarship until it can be offered to every Indigenous student entering the college. 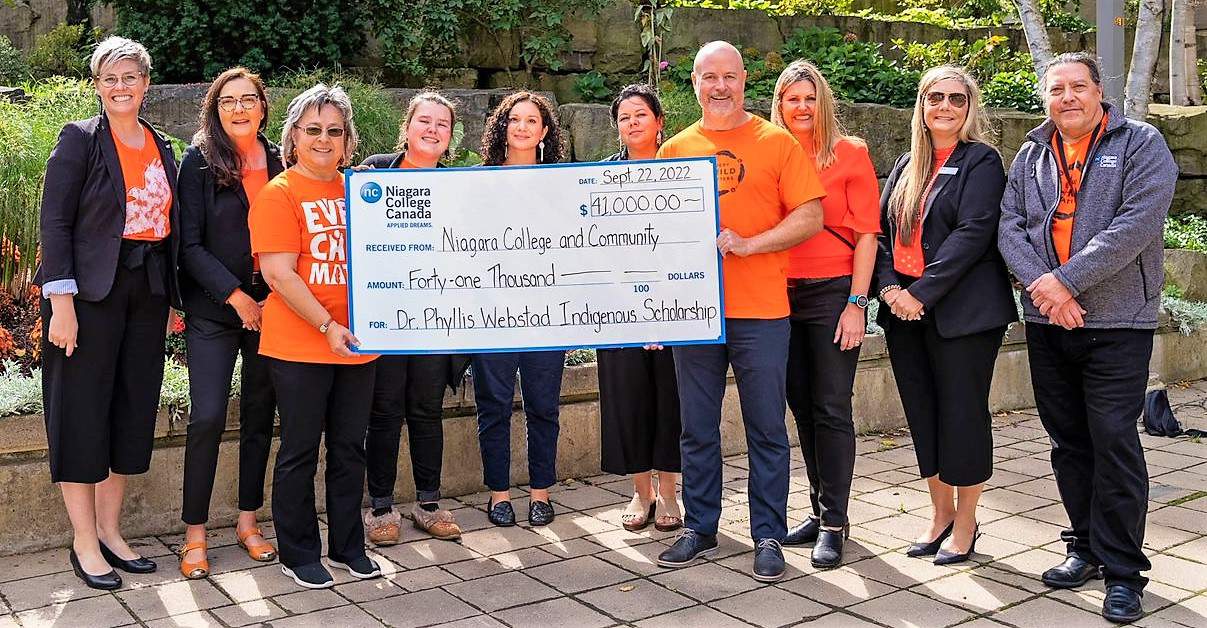