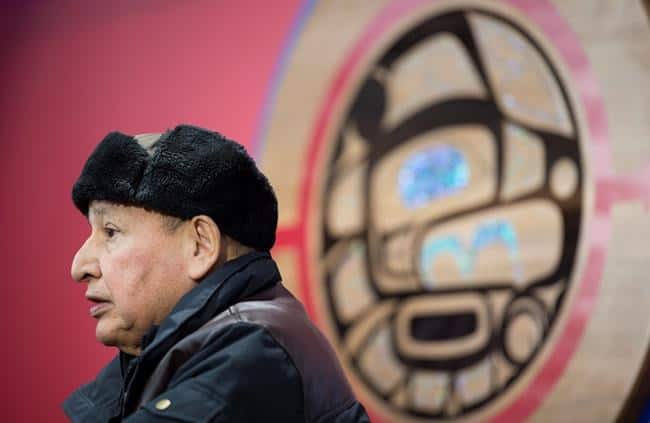 OTTAWA — Many Penticton Indian Band community members in British Columbia were used to looking out from their living room windows to see the city spread out across the Okanagan Valley. Now, they just see smoke.

“This is the smell of negligence on the part of both the federal and provincial governments,” said Grand Chief Stewart Phillip of the Union of B.C. Indian Chiefs.

He said his community and other Indigenous communities in B.C. are now at risk of becoming climate crisis refugees like many other First Nations people who have lost their homes to wildfires in northern Prairie provinces and Ontario over the last two decades.

“We are in that drought situation here in British Columbia as well as Alberta and the Prairies,” he said.

“We have lost our crops here, in terms of the cherry harvest, and there are homes burning to the ground that people have invested their life’s work in.”

Phillip said he believes addressing the climate crisis, ending drinking water advisories, and implementing the Truth and Reconciliation Commission’s calls to action as well as the missing and murdered Indigenous women and girls’ inquiry’s calls for justice, are the fundamental priorities for Indigenous Peoples during the election campaign.

He said the Liberals enjoyed enormous Indigenous support when they were first elected in 2015 after their leader Justin Trudeau made promises to improve their lives.

“Unfortunately, it was long on sizzle and short on substance,” Phillip said.

“He said all the right things and made the appropriate promises. However, the government didn’t follow through.”

In March, the Liberal government said it remains committed to ending all the advisories but it won’t set a new deadline, as 50 long-term drinking-water advisories in 31 First Nations communities are still in place.

The lack of progress on many of the TRC’s calls to action was highlighted in May after the findings of what are believed to be the remains of 215 children at the site of a Kamloops, B.C., residential school.

Since then, several Indigenous communities have announced that hundreds of unmarked graves have been located at the sites of former residential schools.

In June, the Lower Kootenay Band in B.C. said a search using ground-penetrating radar had found what are believed to be human remains at a site close to a former residential school in Cranbrook.

Late last month, NDP Leader Jagmeet Singh became the only federal party leader to meet with Indigenous chiefs at the site of the former Kamloops Indian School. He demanded that Trudeau make good on his six-year-old promise to fulfil all 94 calls to action of the TRC.

Singh was set to meet with the Cowessess First Nation on Friday.

The Conservative, Bloc Québécois, Green, and some Liberal MPs supported a non-binding NDP motion in Parliament in June calling on the Trudeau government to drop legal actions against two Canadian Human Rights Tribunal orders on discrimination against Indigenous children.

The motion also called on the Liberals to accelerate work on the TRC’s calls to action issued in 2015, including funding for investigation into the deaths and disappearances of children at residential schools.

Last week, days before the election call, the Liberal government committed $321 million in new funding for programs that address some of the TRC’s calls to help Indigenous communities search burial sites at former residential schools and to support survivors.

The new money will fund searches of grave sites, help communities manage the sites, provide mental health, cultural and emotional services and help build a national monument in Ottawa that honours the survivors and all the children who were lost.

Cindy Blackstock, a member of the Gitxsan First Nation in British Columbia and the executive director of the First Nations Child and Family Caring Society of Canada, said there shouldn’t be a limit to the amount of money given to Indigenous communities to search for burial sites at residential schools.

“They should be willing to pay whatever is necessary because the Canadian state perpetrated this,” she said.

Blackstock said Ottawa was “the command and control centre for residential schools” and building one monument is not enough to honour the victims of these institutions.

She said several markers across Ottawa should point out how residential schools and colonial practices have harmed Indigenous Peoples.

“In that way you educate people about how pervasive colonialism and residential schools were.”

She said the Liberals have had opportunities and solutions to address the problems facing Indigenous Peoples, especially children, but “their implementation has not been good.”

“Governments are used to doing complicated things if they have their political will behind it. Where things stall is when they don’t really have the political will,” she said.

But David Chartrand of the Métis National Council said Métis communities in Manitoba have seen advancements in child care, homeownership and repairs and economic investments since the Liberals came to power in 2015.

He said he will write letters to federal party leaders to ask about their positions on protecting the identity of the Red River Métis in Western Canada, their land claims, their lack of access to health care and business opportunities and the treaty the Métis are negotiating with Ottawa.

“We’ll ask them: ‘What’s your position on these specific major points? … If you do not answer, we are advising all of our citizens of your answers.'”

“We have got a full scale of strategies right across Manitoba to get our vote out. We have phone-call systems, pickup systems set up. We have buses and vans if necessary. And we are going to haul our people to vote.”