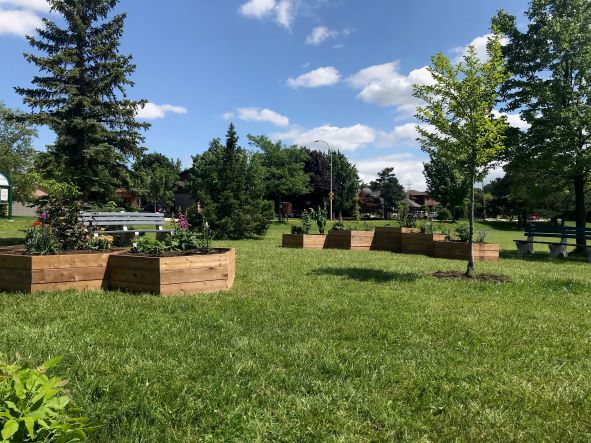 The Scenic Woods Pollinator Garden and Seating Space was one of the community-led projects that was awarded money through the Placemaking Grant Pilot Program. — Mackensey Bacon

The City of Hamilton has awarded funding towards 13 community-led projects that are going to bring more life and purpose to some underused spaces in the city.

Projects funded by the City’s Placemaking Grant Pilot Program include a Children’s Garden in Gage Park, an art installation in Woodlands Park, a mini marsh in Bayfront Park and seed libraries in Dundas.

Three of the thirteen projects; a portrait series in Hamilton Amateur Athletic Association (HAAA) Park, a pollinator garden and seating area in Scenic Woods Park and sidewalk games in Powell Park, were installed earlier this summer.

“We are so grateful for the generous grant for our project – it’s so much more than just a garden,” said Anaïs Cho, one of the founders and youth spokesperson for The Children’s Garden in a City press release.

“Working on this during the pandemic gave us kids purpose and hope during a really tough time. It means that The Children’s Garden is really going to happen now and so many kids and families can share in the joy.”

Placemaking, which is traditionally temporary in nature, challenges community residents or organizations to collectively reimagine and reinvent public spaces and interacts with the unique geography, culture, and heritage of a space.

The $100,000 Placemaking Grant Pilot Program was made possible through a donation from the Patrick J. McNally Charitable Foundation — the same organization that helped save Hamilton’s bike-share service with another $100,000 donation in the spring of 2020.

The City started accepting applications from groups of residents and non-profit organizations in 2020 and a second opportunity to apply for funding will be available this fall for projects taking place in 2022.

“The timing could not be better to support these community-led placemaking projects as we return to public spaces,” said Jason Thorne, General Manager, Planning and Economic Development, in a City press release.

“The community proposed some creative, site-specific projects and I look forward to seeing them appear throughout the city over the next year.”

Applications for the 2022 Placemaking Grant Pilot Program will be accepted beginning Friday, September 24, 2021, until Friday, December 10, 2021.

For more information on the Placemaking Grant Pilot program, visit the City of Hamilton website.