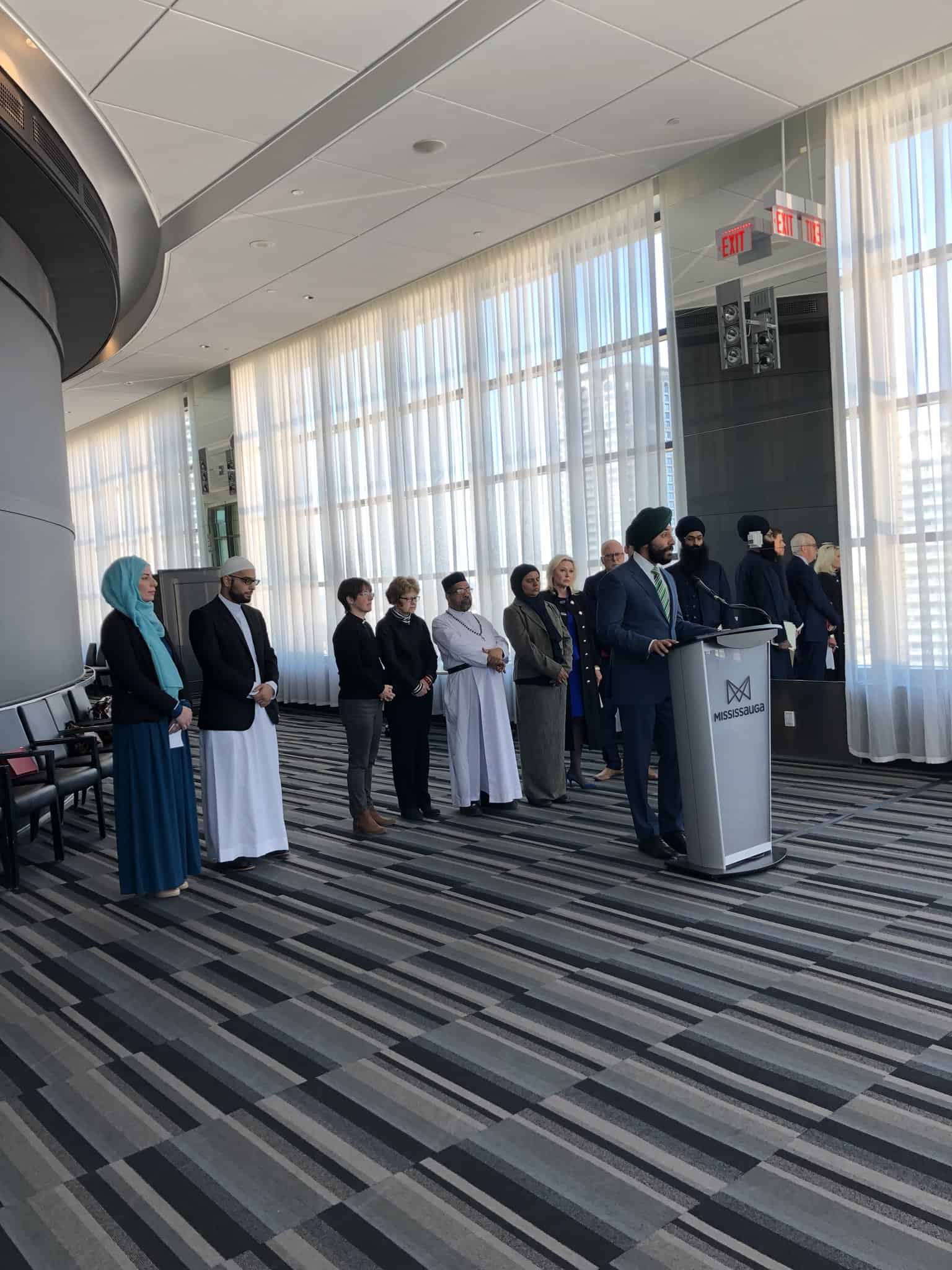 In the wake of an alleged hate crime outside of a Mississauga mosque last Thursday, a press conference organized by the Muslim Council of Peel was held on Monday to denounce the incident.

Various political and spiritual leaders of different faiths spoke up against the incident.

On Thursday March 22, the council claimed a locally known anti-Muslim activist named Sandra Solomon came to Masjid Dar-Al Tawheed, ripped up pages of the Quran, and placed them on congregants’ windshields while they were praying. She also allegedly denounced Islam as “Satan worship”, daring Muslims to challenge her in court if they disagreed with her accusation.

A video of the incident was reportedly posted on the Never Again Canada website, but it has since been removed.

Solomon has appeared at other public events in Mississauga to protest Islam before, including a Building Bridges event in Erin Mills last April and during Justin Trudeau’s 2017 appearance at Mississauga City Hall.

“I am disgusted and disturbed by these actions that have happened in our city. I stand with our Muslim community and with communities of all faiths,” Mayor Bonnie Crombie said during the press conference. “We have no tolerance for any intolerance in our city. We will come together, and we will emerge stronger than ever.”

“I want everyone in Mississauga to feel safe when practicing their religion, despite what they practice. We want people to feel safe in their homes, as well as the places where they worship and we will continue to ensure that our residents feel safe and accepted in our city,” Crombie continued.

“Islamophobia is real,” said federal Economic Development Minister Navdeep Bains, the MP for Mississauga-Malton, where the Masjid Dar-Al Tawheed is located. “We cannot and should not take our rights and freedoms for granted. Freedom, equality, inclusion – these are core Canadian values. They represent who we are and represents the underpinnings of our society which is our diversity. And our diversity is our strength.”

A number of other faith leaders also condemned Solomon’s actions. Bernie Farber, the former CEO of the Canadian Jewish Congress, said Islamophobia is the flipside of anti-Semitism, and that Jews know what it’s like to experience hate and how action must be taken now to stop it. Graeme Melvin, the pastor of the Meadows Church, said all places of worship no matter which faith must be respected, and that Solomon’s actions overshadowed whatever point she was trying to make.

Ibrahim Hindy, the Imam of Masjid Dar-al Tawheed, said it was deeply distressing to see a known Islamophobe come into their neighbourhoods with the sole intent of promoting hatred, also attempting to make profit through fundraising and online ads associated with the platforms that host this material.

Angie Hindy, the Vice Principal of the Safa and Marwa Islamic School, said she was concerned about was the safety of the students who don’t know why anyone would target their school and prayer space.

Rabia Khedr, the Executive Director of the MCP, said the community is calling for three points of action:

Khedr said that all Islamic organizations are reviewing their security protocols, and that Peel Regional Police are investigating this matter as an act that is hate-motivated.

You can watch the entire press conference that took place at Mississauga City Hall below:

Join me as I stand with faith groups from across #Mississauga at the Muslim Council of Peel’s press conference. https://t.co/D35HOJFB8a

Solomon runs her own website, called “Voice of Sandra Solomon” on which she claimed she grew up studying the Qur’an and following Islamic teachings, but soon found that many of those teachings seemed contradictory with each other and that she was experiencing disillusionment. She eventually started studying the Bible, found Jesus and converted to Christianity, and said that when she revealed this to her family she was effectively disowned by her sister and not allowed to see her son, who was left behind in Jordan with her abusive ex-husband when Solomon fled to Canada.

If her story is true, then Solomon’s story is more tragic than the public face of an alleged anti-Muslim, hate spewing demagogue. There are many people that could relate with a grieving mother that was forced to abandon her son that she could not bring with her over to this country, as well as some #MeToo elements if what she said about an abusive ex-husband is true. But while one cannot really judge someone’s testimony of faith, it seems contradictory to say you’re now a Christian, finding Jesus’ love, when you’re allegedly going around tearing pages out of another religion’s holy book, thereby showing the opposite. I would certainly feel very offended if someone came up to my church parking lot and starting ripping out pages from the Bible in front of me.

Let’s also not be naïve and think Solomon is purely driven by conviction in her crusade; her website is structured to solicit donations and sell merchandise, such as $30 t-shirts with the words from O Canada “We Stand on Guard for Thee” and on the back “I Support Sandra Solomon”. She’s been interviewed by outlets such as the controversial Rebel Media, she got a major media outlet (Global TV) to accompany her on her trip to the mosque, and her whole online operation comes off like a poor woman’s version of Alex Jones’ Info Wars, which is a hotbed of anti-Muslim sentiments and conspiracy theories. To say money is not a motivating factor from this stimulating of hate is an understatement.

Religion is a difficult topic to discuss for many people. As some of the faith leaders who spoke said, having a dialogue is much better than spewing fire and brimstone in one’s direction.