Childcare is Very Expensive in Brampton 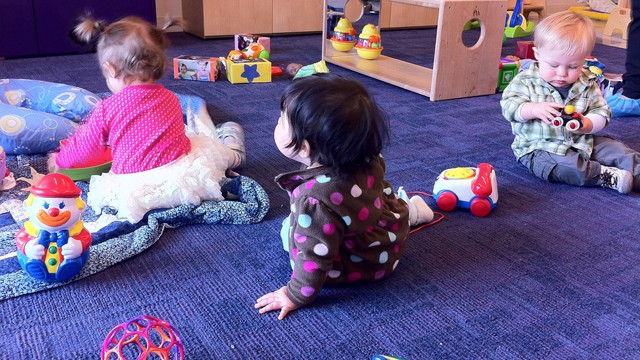 It’s long been known that the sky-high costs of childcare are a serious hardship for many families in Canada (and the GTA in particular).

It’s long been known that the sky-high costs of childcare are a serious hardship for many families in Canada (and the GTA in particular).

Now, a recent study has revealed that many GTA cities–Brampton included–pay hefty amounts for infant and toddler care.

The Canadian Centre for Policy Alternatives recently released a study, entitled A Growing Concern: 2016 Childcare Fees in Canada’s Big Cities, that reveals that Brampton families can expect to pay a whopping $994 a month for full-day infant care and $1,085 for toddler care. As far as pre-school fees go, Brampton families pay about $955 a month.

That said, Brampton families are still a little better off than their Toronto counterparts. In TO, families can expect to pay $1,649 a month in infant care fees (that amounts to $19,788 a year). For toddlers, Toronto parents pay about $1,375 a month.

Since the cost of living is incredibly high, it’s usually necessary for both parents to work during their children’s early years and incredibly high childcare expenses are difficult for working families to contend with. For that reason, governments are hoping to alleviate the financial burden for what is absolutely an essential service.

According to the study, a new national framework on early learning/childcare is being developed by federal, provincial/territorial governments and indigenous communities. The federal government has pledged to invest $500 million in childcare in next year’s budget in a move that will, ideally, make the service more affordable.

“There is much work to be done in this area, as parental child care fees vary dramatically across the country,” the study reads. “Infant fees are generally the most expensive and there are fewer infant spaces than there are spaces for any other age category.”

The study also points out that childcare fees are on the rise.

“Toddler fees have risen by eight per cet on average between 2014 and 2016 (three times faster than inflation),” the study reads. For Brampton in particular, fees have increased seven per cent. While the news isn’t good overall, the study points out that Brampton was actually the only city to experience a slight decrease (two per cent) in pre-school fees (meaning families are saving about $22 a month).

Brampton families–like most other Canadian families–also have to contend with waitlists, which can be stressful for parents who are hoping to start daycare as soon as their maternity or paternity leaves end. That said, Ontario banned the practice of charging families wait list fees in September, so that’s one less cost for Brampton parents to worry about.

In some other good news, lower-income Brampton families who receive childcare subsidies usually only to have to pay monthly out-of-pocket expenses to the tune of $90 (families in Saskatoon pay about $497, to put things in context).

In terms of low childcare expenses, families in Quebec pay the least, with infant and toddler childcare costing about $164 a month (fees are set by the province).