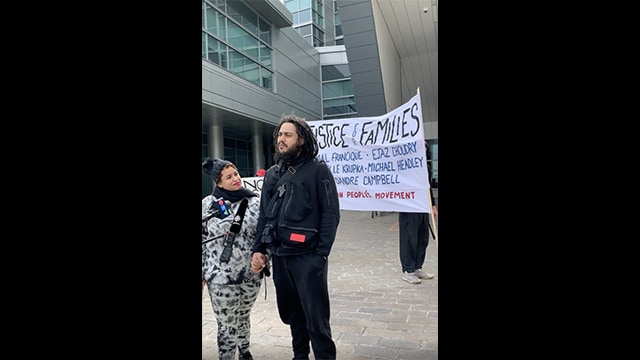 Chantelle Krupka says she and her partner, Michael Hedley, are where they are today because of the support they have received from the community.

A day after the Mississauga woman had all charges against her and Hedley dropped stemming from an incident last May that resulted in her being shot and Tasered by Peel Regional Police at her home, the couple held a press conference outside the Brampton Courthouse to express thanks for those who have rallied behind them.

“What we want to make clear is that it was the power of the people, power of the community that made this happen,” Krupka said. “It was the people behind us who came in here and (sat) with us and loudly stood against what is wrong.

“We will continue to do this for other families, so they see some justice as well.

Krupka and Headley were charged following an incident on Mother’s Day in 2020 when two officers responded to a call about a domestic incident at her Mississauga residence.

Both were Tasered by the officers and Krupka was shot in the abdomen.

After the incident, Krupka was charged with possession for the purpose of distributing and laundering proceeds of crime, while Headley was also charged with obstructing a peace officer and assaulting a police officer.

Krupka and Headley have maintained their innocence and say they are now planning on pursuing civil action against Peel police.

“We just wanted to let the community know that this is what the police do to try and justify their actions in any way, shape or form. But it’s also to stand strong, maintain your innocence and stay organized, and have a community behind you. Then justice will prevail.”

While Headley says it “feels amazing” to have the charges dropped, this last year has been difficult for him and Krupka.

“The whole time I knew I’m completely innocent and that, but it’s heavy weighing on your shoulders and weighing over your head just thinking the system is right there ready to snatch you up and put you away,” he said.

“It’s scary. Trust me, it’s not something anybody wants to go through in any type of situation.”

Const. Valerie Briffa, who shot Krupka, was later charged by Ontario’s Special Investigations Unit (SIU) with criminal negligence causing bodily harm, assault with a weapon and careless use of a firearm.

The offences carry the possibility of jail time.

Briffa would resign from the police service shortly after she was charged.

“That night the officers approached us, from the moment they called us, they were aggressive,” Krupka said. “They had their mind made up that we were just bad. Just the bad guys and they acted upon that.”

Asked about her recovery, Krupka says she is getting better by the day. She said she’s pregnant now and that the recovery has complicated things, but she maintains she is being taken care of and trying to stay healthy.

“The most important thing is trying to keep our minds healthy, because the trauma from this is still, even though it’s coming up on a year, there’s still night terrors, there’s still flashbacks,” she said. “It was the mental part that was the most damaging, but we’re definitely pushing through.

“Again, with the support of the community we feel empowered and feel supported.”

Krupka is still facing a charge of mischief over $5,000 after her alleged involvement in a December rally outside a Peel police office.