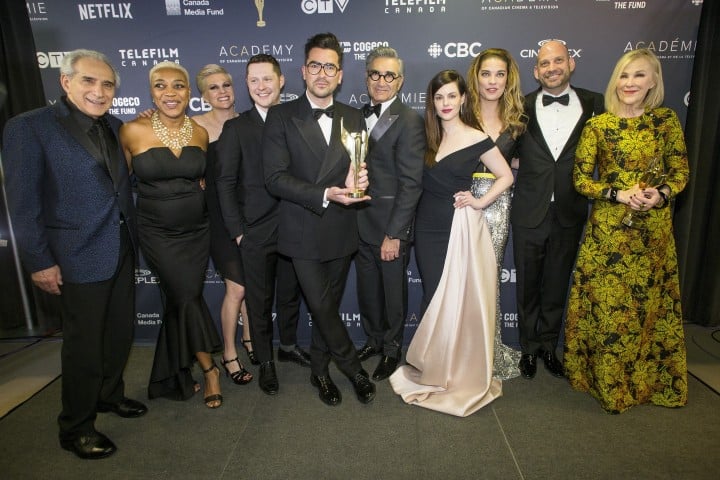 Many of the public broadcaster’s nominated shows have ended for various reasons in recent months, shaking up what has been a golden era of its TV lineup.

Global smash “Schitt’s Creek,” which is up for a leading 21 CSA trophies, wrapped its sixth and final season on its own terms last year.

The buzzy “Trickster,”  a 15-time nominee, was cancelled after just one season this past January amid controversy over co-creator Michelle Latimer’s claims of Indigenous ancestry.

The beloved “Kim’s Convenience,” up for 11 awards, is set to wrap up with its fifth-season finale on April 13 after producers said its co-creators were moving on to other projects.

“Baroness Von Sketch Show” left the air after its fifth season last fall in what the comedy troupe felt was “a natural time” to end.

“Frankie Drake Mysteries” wasn’t renewed after four seasons last month. And “Burden of Truth” concluded with its fourth season earlier this month after producers said it had a “natural end.”

Industry experts say the outcry over the demise of those shows proves the public broadcaster is doing its job by making quality, distinctively Canadian programming that is popular on global platforms like Netflix and the CW.

In order to continue that momentum, however, observers say the corporation must continue to focus on diverse, homegrown scripted programming that serves Canadian culture — and it needs adequate funding to do so.

“While all good things do come to an end, I think we need to make sure the replacements, whatever comes next, lean in even harder to great Canadian storytelling that’s shamelessly, distinctively Canadian,” says Daniel Bernhard, executive director of watchdog group Friends of Canadian Broadcasting.

“It works here and it works around the world. The private networks, we know, are less inclined to make this kind of programming. The CBC makes it and it’s good. And so we need to do more of it.”

But the government must also play a role, Bernhard adds, noting the cost of TV production has significantly increased but the CBC’s budget hasn’t risen since 2016.

“The CBC continues to be among the most poorly funded public broadcasters in the world. And the private TV companies are also disappearing, because all the ad revenue goes to Google and Facebook, and all the subscription revenue goes to Netflix and Amazon, so their ability to finance Canadian programming is also diminished,” says Bernhard.

“If the government thinks this is important, and the Canadian public clearly values this content, then we’ve got to step up and make sure that the CBC can afford to be producing — and producing at a high quality as they’ve been doing in this last generation of shows.”

A representative from the CBC was not available for an interview.

Gage Averill, dean of the faculty of arts at the University of British Columbia in Vancouver, says the exodus of shows is among various setbacks the CBC has had in recent years.

“Sports being a considerable one, they’ve lost a lot of market share in sports,” he says. “And there’s a lot of competition on the news side from other platforms. So it doesn’t occupy that vaunted status they once had. Year by year the stats change, but the CBC occupies about five per cent market share these days.”

With a federal budget set for next month, whispers of a Canadian election, and a current licence renewal process, the CBC is facing many questions about its future and how to stay competitive in the expensive world of broadcasting.

At the same time, the corporation is also gaining international attention, with “Schitt’s Creek” taking U.S. awards shows by storm and the CBC getting mentions on “Saturday Night Live.”

“SNL” recently had a comical bit about the public broadcaster, and last weekend cast member Bowen Yang told the audience “Save ‘Kim’s Convenience’” at the end of a segment on anti-Asian violence.

“People have been saying for years that ‘Canadian content is second-rate, it’s some kind of bureaucratic, evil thing.’ And it’s not, actually. It’s good content that’s well enjoyed, and not only in Canada, as the Screen Awards nominations attest, but also around the world,” says Bernhard.

“When ‘Saturday Night Live’ and its audience are aware of and in love with a distinctively Canadian story like ‘Kim’s Convenience,’ I think that shows that the CBC is doing its job.”

The ending of such shows is “a real loss” for the industry and the corporation, says Averill, citing great representation on the Indigenous-focused “Trickster” and the Korean-Canadian-focused “Kim’s Convenience,” and the potential for such programming to attract eyeballs and revenue.

The CBC has yet to reveal its full upcoming programming lineup but it recently announced two new series featuring “Kim’s Convenience” cast members: Andrew Phung in “Run the Burbs” and Nicole Power in the spinoff “Strays.”

Other upcoming new shows include “Sort Of,” starring Bilal Baig “as a gender fluid millennial,” and “The Porter,” about railway workers in the historically Black Montreal community of Little Burgundy in the 1920s. The CBC has also been getting buzz with the recently launched buddy-cop dramedy series “Pretty Hard Cases.”

Canadian Screen Award-nominated “Trickster” star Crystle Lightning says the series resonated because it appealed to all ages and was “completely different and original.” She hopes to see more Indigenous representation on the CBC.

“I would like to see more of the Indigenous writers and directors coming about, because I think it’s something that has been longed for. And I think that’s what ‘Trickster’ did — it opened up that door,” says Lightning, who is set to appear in two episodes of the CBC series “Diggstown.”

“It’s so sad that it was just taken away.”

Averill agrees with Bernhard that the CBC should continue to focus on creating Canadian TV shows focusing on culture here. Such shows are a reliable source of revenue and a crucial part of the business model, especially when they have “fairly quirky ideas,” gain international attention and land on global platforms.

But a show like “The Porter,” which showcases a rich multicultural history and  features a world that hasn’t previously been explored on television, is an example of where Canada can lead in the global TV landscape, he adds.

“Canadian content is not second-rate. People like it, people love it, here and abroad, and they need to do everything they can to continue to produce it,” Bernhard says.

“Just stick with the program, keep the faith. And at the same time the government needs to make sure there’s enough money in the system to produce this content.”