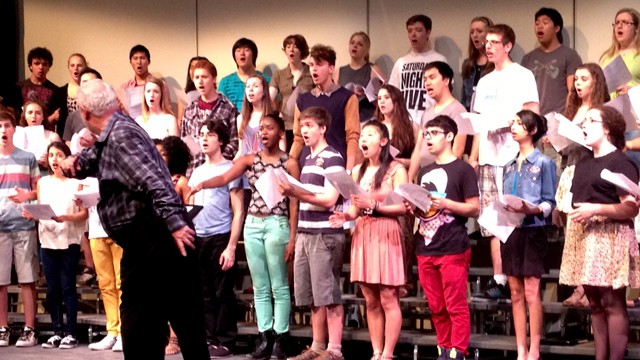 They’ve got the pipes likes Jagger- that’s for sure.

If you haven’t heard the buzz by now and have no idea what I’m talking about, crawl out from that rock you have been living under! The Cawthra High School choir is teaming up with Mr. Mick Jagger himself to perform live in Toronto at the Air Canada Centre on May 25th and June 6th.

Ranging from grades 11-12, these students are no strangers to the field of music. Known as a school for the arts, the Cawthra High School Choir was selected by the Rolling Stones because of their vocally talented students.

The idea is to re-create The Rolling Stones’ original 1969 hit, “You Can’t Always Get What You Want” from their album “Let It Bleed.”

The song originally featured a choir of classically trained vocalists, and conductors Bob Anderson and Sherri Collins have done a bang up job whipping these kids into shape-vocally.

After hearing the original tune about a bazillion times throughout my childhood (my dad being the major Stones fan that he is), I was very interested to hear what these kids could do.

I found a seat in the auditorium, feeling nostalgic just to be back in high school again, and I waited for rehearsal to begin.

From the first note they sang, I was in shock.

I sat there, literally with my mouth agape, goosebumps prickling my arms.

The sound of their voices in unison was so crisp and in key, I just couldn’t believe it was only their second time rehearsing the song.

Their tone was perfect.

I could instantly tell each and every one of these students were wonderfully talented, and I could see why they were chosen.

Mr. Anderson was diligent in conducting his students, encouraging them and praising them when needed.

“Altos, sopranos, crescendos…” I felt as if he was speaking another language, but these students knew exactly what he wanted.

His lighthearted attitude and obvious passion for music seemed to make the students want to improve. I could tell they want this to be perfect.

I mean, really, what kid at 16 can say, “Oh ya, I’m playing with The Rolling Stones tonight in front of thousands of people”?

This is something that they are going to remember for the rest of their lives, and personally I am very proud that one of Mississauga’s very own high school choirs was chosen.

“It’s a dream come true,” says 16-year-old Marika De Korte.  “I’m a high school student. Never could I ever have imagined that I would be coming to Cawthra and then singing with The Rolling Stones!”

De Korte’s reaction is not unlike those from the rest of her choir peers.

Jerry Ding, 16, also recalls receiving the news in class and laughing because he thought it was just a joke. “It was just so unbelievable to me so I had to laugh. It took me a minute to realize they really were serious about the whole thing, and I think I am still in shock,” he says.

Word has quickly spread around the school (as well as the city), and the students are focused on rehearsing and tweaking the song so that it’s just right.

This is a once in a lifetime opportunity so these highschoolers are putting priorities aside and making music their number one.

Nowadays, it’s cool to be a ‘band geek’; especially for Cawthra students. After all, they get to play with the freakin’ Rolling Stones!

Tickets for both May 25th and June 6th shows on sale at ticketmaster.ca.