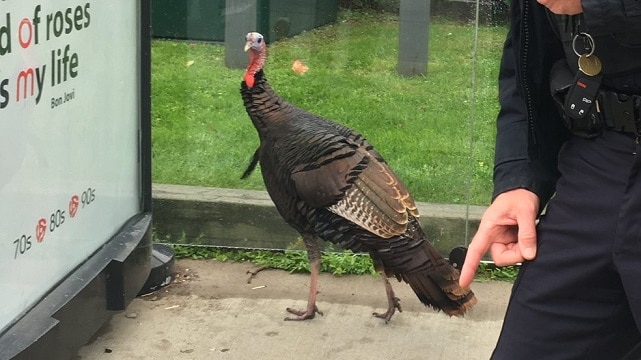 Just in time for Thanksgiving?

If you were in the area of Lakeshore Road West this morning, you may have spotted a wild turkey milling around near one of the bus stops.

Police tweeted about the incident at 3:11 p.m., reporting that they were able to assist Animal Services in bringing the turkey back to green space, but not before the lost bird caused traffic issues by distracting a few drivers.

Focus on the road, no matter what the distraction is! This wild turkey caused issues with traffic on a #Mississauga street this morning. #PRP assisted Animal Services escort this nervous turkey back to green space. #ThanksgivingWeekend #WhyDidTheTurkeyCrossTheRoad pic.twitter.com/jcgvPqJd0B

A Facebook user by the name of  Margarita Ortisi shared a few videos of the incident, which can be seen below:

This isn’t Peel’s first run-in with a lost turkey — back in March, video footage surfaced of a large and aggressive turkey chasing a male resident in Brampton, while he tried to keep it at bay with a stick.

Thankfully this one wasn’t so hostile!