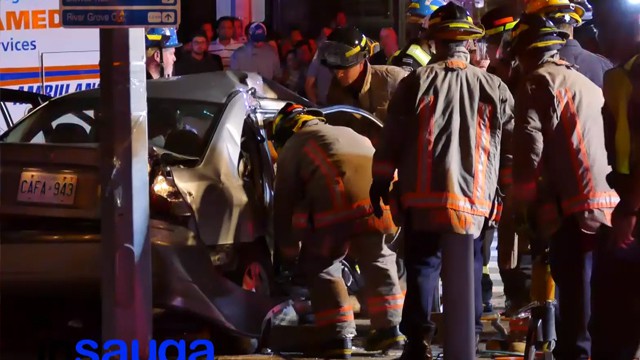 A serious collision has prompted emergency crews to close off the Britannia Rd. and Bidwell Trail intersection.

Peel Regional Police Constable Mark Fischer recorded a video at the scene and advised drivers to avoid the area.

According to Const. Fischer, two vehicles collided on Wednesday evening at approximately 8 p.m. and one vehicle subsequently struck a pole. One car had three occupants who were seriously injured and one was taken directly to a trauma centre in Toronto. A second was taken to a local hospital with life threatening injuries and a third person was taken to hospital with minor injuries. The other vehicle involved also had three occupants, but no one was injured.

A witness said that tow truck crews pulled one of the cars away from the wreck so firefighters could extricate one of the occupants from the other car. He said the impact was considerable and at least one person was trapped for 20 minutes.

Britannia is closed between Creditview Road to the west and Douguy Rd. to the east.

The Major Collision Bureau is investigating and police expect the closure to last several hours.

You can see a video of the aftermath of the collision below, courtesy of Pascal Marchand.
(The video is graphic, so viewer discretion is strongly advised.)