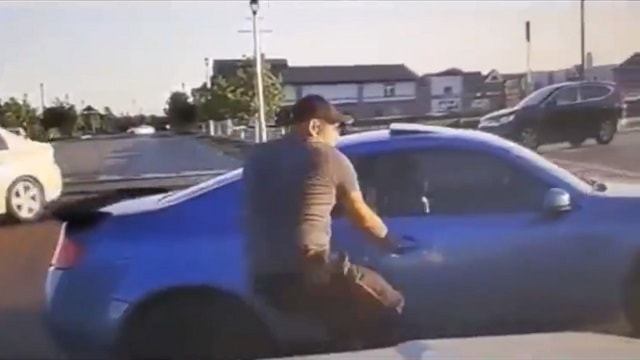 Prior to a fatal collision on Thursday that led to the death of a woman and her three daughters, video footage shows the driver who was involved in the crash engaged in a reckless driving incident two days earlier.

The video, which was shared by Brampton mayor Patrick Brown, shows multiple residents attempt to open the car and stop it from driving off two days before the crash that claimed the lives of 37 year old Karolina Ciasullo and her daughters Clara, Lilianna and Mila, ages one, four and six.

According to Brown, officers also attempted to stop the vehicle to no avail.

“He [the driver] belongs behind bars for taking four innocent lives,” said Brown, who stated he was infuriated at the incident. “Peel Police and residents did their best. This was a brazen repeat offender with no regard for human life.”

According to Brown, the 20 year old driver had a prohibited license for multiple driving offenses.

Community members & police tried to stop the driver. He was having none of it. He belongs behind bars for taking 4 innocent lives. This was his driving prior to the accident. @PeelPolice & residents did their best. This was a brazen repeat offender with no regard for human life pic.twitter.com/gYo0B4h1pI

Around noon on Thursday, June 18, a Peel Regional Police officer was travelling westbound on Countryside Drive in Brampton when he observed an Infiniti vehicle travelling eastbound.

A short time later, at the intersection of Countryside Drive and Torbram Road, the Infiniti was involved in a collision with a van that had been travelling northbound on Torbram Road.

The six-year-old girl was pronounced dead at the scene. The mother and her four-year-old daughter were pronounced deceased at Brampton Civic Hospital, and the one-year-old succumbed to her injuries after being transported from the Brampton hospital to the Hospital for Sick Children.

The driver of the Infiniti was seriously injured and taken to hospital for treatment. His identity has not been disclosed by police at this time.

Inbrampton.com learned that Ciasullo was a teacher loved by students and staff in the Dufferin Peel Catholic District School Board (DPCSB). Ciasullo taught at St. Vincent de Paul in Mississauga in the past, and was a Grade 4 teacher at St. Isaac Jogues Catholic Elementary School in Brampton at the time of her passing.

“The DPCDSB community was saddened to learn of the tragic loss of life of Karolina Ciasullo, a Grade 4 teacher at St. Isaac Jogues Catholic Elementary School, and her three children. Our deepest condolences go out to her husband, other members of the family, friends & colleagues,” the school board said in a statement.

Ontario’s Special Investigations Unit (SIU) is continuing to investigate this incident and has assigned four investigators, three forensic investigators, and one collision reconstructionist to the case.

The SIU is urging anyone with information or any video evidence to contact the lead investigator at 1-800-787-8529.

In an interview, Mayor Patrick Brown spoke with Khaled Iwamura of Inbrampton about the incident: