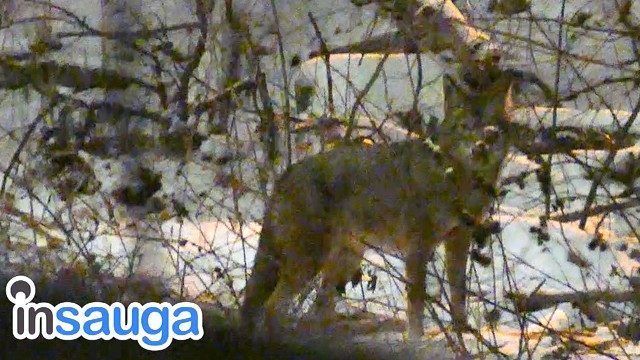 Early Saturday morning around 6am (February 11, 2017), we caught footage of a coyote by Cooksville creek by Burnhamthorpe Road right next to the Absolute Towers.

When it comes to urban coyotes, the main concern usually revolves around house pets. Shy or not, coyotes will hunt pets who are off-leash or otherwise unattended outdoors.

So, what do you do if you encounter a coyote while walking your dog around City Centre?

You can also clap, shout, make startling movements or throw objects in the coyote’s general direction. If you behave aggressively and erratically, the coyote will likely run off.

That said, do not approach or attempt to chase the animal — that is extremely dangerous and may provoke an attack. You can also startle your furry stalker by opening an umbrella, using a flashlight (you should always carry a flashlight during nighttime walks in unlit areas) or activating an alarm or other loud noise on your phone.

Rare Sighting of a Coyote in City Centre in Mississauga from insauga on Vimeo.