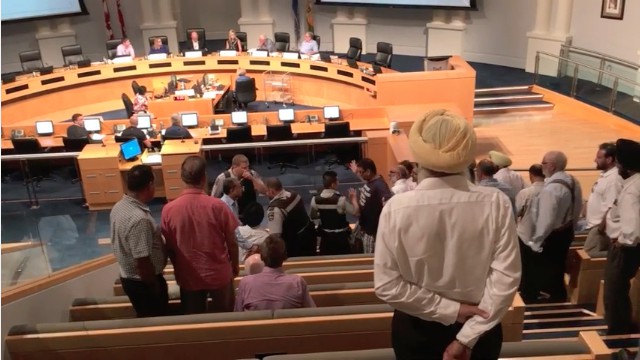 Things are getting ugly at city hall, and perhaps unsurprisingly, it has everything to do with the ongoing Uber vs taxi quandary.

Police were called in after representatives from the taxi industry began hurling accusations at Mayor Bonnie Crombie, the Mississauga News reports.

The trouble occurred during Thursday’s committee meeting for the city’s public vehicle pilot program. Upset by how Crombie was handling the situation, taxi representatives began loudly accusing her of corruption and bribery.

One such representative was Karam Punian, of the Airport Limousine Drivers Association in Toronto. His remarks included “How much is Uber paying you?” and “We’ve never seen a shameless mayor like this one.”

Councillor Ron Starr asked Punian to take a seat several times before eventually calling security to have him removed. Other taxi representatives joined in on the shouting, and Starr decided to adjourn the meeting.

It isn’t the first time something like this has happened — a similar incident took place last June, again involving Punian (and a few others) shouting angry remarks at the committee. Unfortunately, at the rate things are going, it’s not likely this will be the last occurence either.