CAUGHT ON VIDEO: Mississauga Paramedics Help a Skunk with Cup Stuck on its Head 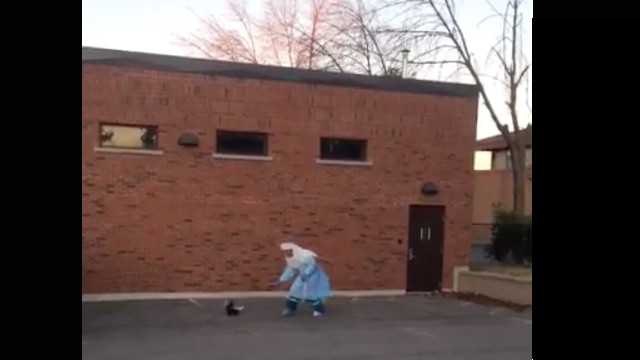 Skunks, for their less than stellar reputation, are still cute fuzzy animals at their core. So it’s heartwarming to know that paramedics are willing to lend their services to a skunk in need.

The skunk in question was stumbling around with an ice cream cup stuck on its head, CityNews reports. It was found Sunday morning outside Peel Paramedics’ Malton location, in the area of Derry Road East and Goreway Drive.

A paramedic approached the skunk and removed the cup, although not before putting on protective gear to defend against any potential sprays.

Paramedic Justin Mausz posted two videos to his Twitter, showing the helpless critter wandering around before being rescued from its predicament. Check them out below:

An earlier video of our "Patient", the poor thing was bumping into walls when we found it. @Peel_Paramedics pic.twitter.com/gKWc7tDuyX

Our 'Rescue' this morning: a skunk with a cup stuck on its head @Peel_Paramedics help all sorts of "Patients" pic.twitter.com/HMd8zuwx9Q