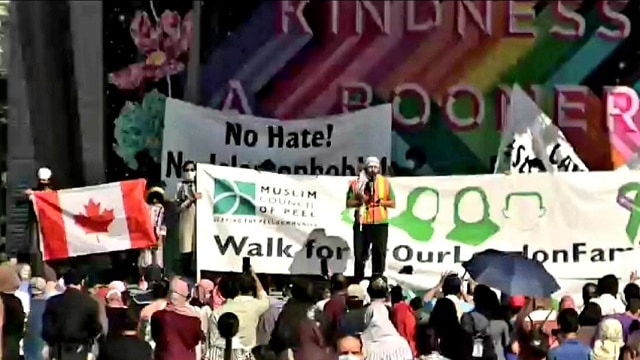 Hundreds of residents gathered in downtown Mississauga this afternoon (June 12) for the Walk Against Islamophobia at Celebration Square.

The walk was organized by the National Council of Canadian Muslims and the Muslim Council of Peel to honour the Afzaals, a Muslim family that was run down and killed in London, Ontario earlier this week.

The attack happened on Sunday, June 6, during which the family was run down by a vehicle along a London street. A 9-year-old boy was the sole survivor.

A 20-year-old man, who police say targeted the family for their faith, has been arrested and is facing charges.

“This walk is an expression of solidarity with the family and against all forms of Islamophobia. Our community, our children and our families need to feel safe today,” said Rabia Khedr, spokesperson for the Muslim Council of Peel.

“Action needs to be taken so those with murderous intent do not commit their evil acts of injustice against innocent members of the Muslim community.”