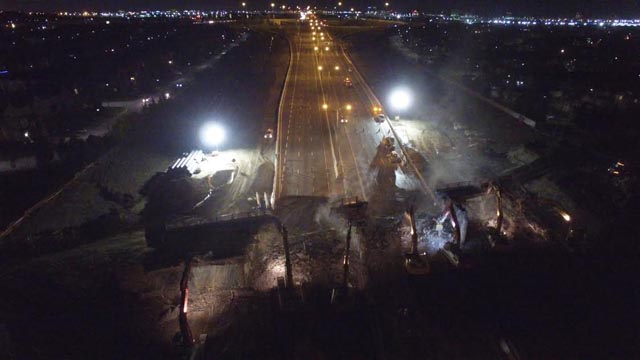 In the early morning hours of Sunday morning (Oct. 30), construction crews were on scene at a massive bridge demolition above highway 401 in Mississauga.

The Second Line West bridge was demolished as part of a long-term project to expand the highway. Yesterday (Oct. 29), the province issued a notice advising residents of the major construction. Lanes were closed at 9:00 p.m. and the highway in the affected area completely closed at 11:00 p.m.

The demolition took place just west of the Mavis interchange.

According to the Ontario Provincial Police, the demolition concluded shortly after 9:00 a.m.

As you can see from the video, the first part of the footage shows an aerial view and the second part shows a ground view of the impressive display of heavy machinery.

It also sounds like a rollercoaster the entire time.