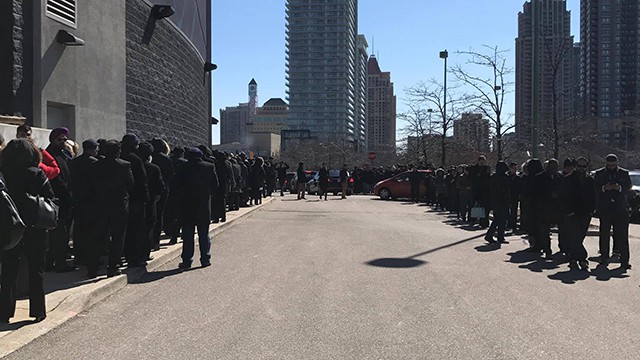 If you had trouble maneuvering around the City Centre area today, it’s because M City launched (meaning you’ll soon be free to purchase a unit) and drew absolutely incredible crowds to the Square One area.

A witness at the scene told insauga.com that the massive crowd, full of realtors clamoring for a good spot in the incredible lineup, was wild. As one would expect, there was some reported line jumping and pushing.

We caught the event on video and if you want to see things get really crazy, start watching around the 30 second mark.

Crazy Line Up for M-City from insauga on Vimeo.

Buyers can expect to begin occupying the first tower, which will be flagship building (and the tallest in the city) for Rogers Garden City, in 2021. The 60-story building will rise above a five-storey podium and boast 776 suites.

Prospective buyers with realtors can begin purchasing units on April 1.

The highly-anticipated new development is slated to become a 10-tower, 15-acre, 4.3 million sq. ft. community that will feature over two acres of public parkland (which is good, as we all know green space is a big deal).

The community is designed to fit into the city’s lofty Downtown 21 plan and is, for all intents and purposes, intended to further the city’s transformation from a semi-urban bedroom community to a richer, denser urban space.

Although the development was just announced last fall, it’s been in the works since 2007. Almost 10 years ago, Rogers Real Estate called on Urban Capital to help transform the long-held family asset (the Rogers family purchased the land in the 60s) into what they’re calling a “legacy community.”

The project should break ground sometime this year.