CAUGHT ON VIDEO: Hamilton police climb to the roof after person barricades themselves 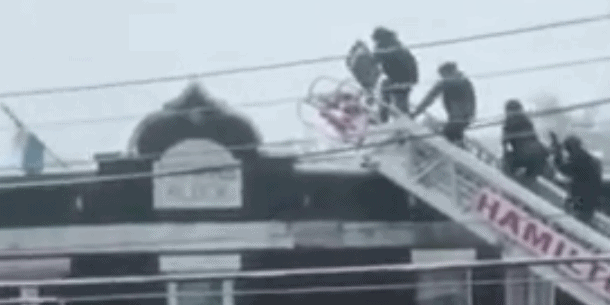 It took more than five hours but Hamilton police, with the help of fire officials, arrived at what they call a “successful resolution” after dealing with a barricaded person on Wednesday.

The Hamilton Police Service (HPS) first notified the public at 8:31 a.m. that they should avoid the area of Barton Street, between Sherman and Kinrade Ave.

“The safety of everyone involved and the public is our primary concern, as such we ask for your patience as we work through this,” tweeted HPS.

The incident resulted in road closures in the area.

In a video submitted to intheHammer, officers from the Emergency Response Tactical Unit (ERTU) can be seen scaling a ladder provided by the Hamilton Fire Department.

Police then stood atop the Perkins Block building at the corner of Kinrade and Barton.