CAUGHT ON VIDEO: Firefighters Battling a Massive Blaze in Mississauga 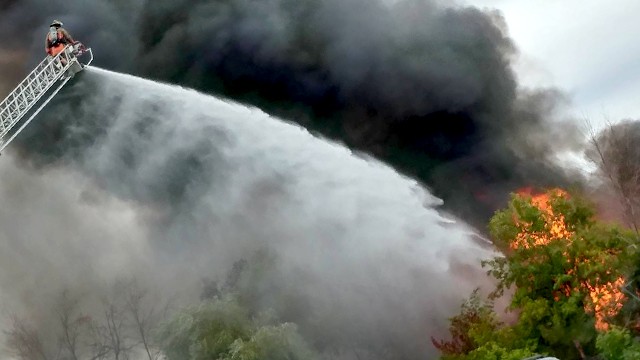 It’s been a busy morning for fire crews in Mississauga. First, Mississauga Fire and Emergency Services were called to a contained apartment blaze on Glen Erin Drive and now they’re on scene dealing with an active fire in the Mavis and Central Parkway area.

It appears that the blaze broke out in scrap yard. Multiple vehicles are currently on fire.

There’s heavy smoke and emergency crews in the area, so residents are asked to stay away until the situation is under control. Road closures and delays are to be expected. You can see a video of the blaze, courtesy of Pascal Marchand, below.

There are no reported injuries or evacuations at this time.

Firefighters Battling a Massive Blaze in Mississauga – Sept 26-2016 from insauga on Vimeo.