CAUGHT ON VIDEO: Crazy Video of Wheel Flying Off an SUV on a Hwy in Brampton 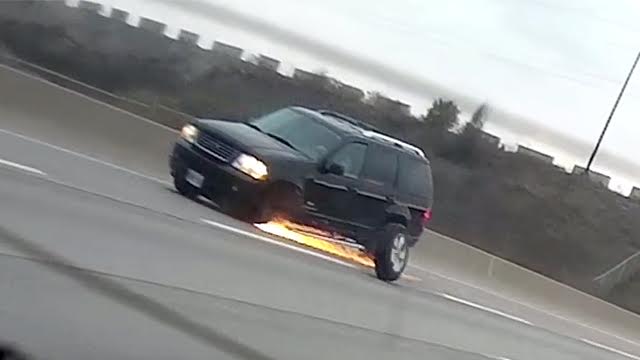 We’ve all had bad days, but perhaps not quite as bad (well, scary) a Saturday as the driver who lost his wheel in a pretty spectacular fashion on the 407 in the Brampton area.

We’ve all had bad days, but perhaps not quite as bad (well, scary) a Saturday as the driver who lost his wheel in a pretty spectacular fashion on the 407 in the Brampton area.

On Nov. 19 at about 8:00 a.m., a driver operating a Mini Cooper on route to London, Ont. caught a pretty dramatic wheel failure on a dashcam.

According to Ontario Provincial Police Sgt. Kerry Schmidt, the tires on the SUV had been changed to snow tires just a few days before the frightening incident.

“There is no legislation regarding having your tires re-torqued and rechecked after they’ve been installed, but it would certainly be a best practice and if you see what happened to that gentleman in the black Ford Explorer on the westbound 407 just near Airport Road, that is pretty dramatic.”

Although the incident did not lead to any injuries or a crash (although it certainly resulted in damage to the vehicle), Sgt. Schmidt said that the OPP has investigated fatalities that resulted from lost wheels.

“I want everyone to see that dramatic and spectacular video of a wheel…and fire and sparks coming off a vehicle,” he said, adding that such an occurrence could prompt a driver to lose control and go into a wall, another car or a ditch.

“Last year, we investigated about 140 wheel separations just in the GTA alone. Who knows how many more experience wheel-offs that we’re not aware of,” he says.

Sgt. Schmidt is reminding people who recently switched to snow tires to please check their wheel fasteners carefully and return to shops if necessary to ensure their wheels are tightly fastened.