CAUGHT ON VIDEO: Car Fire Breaks Out at Mississauga Apartment 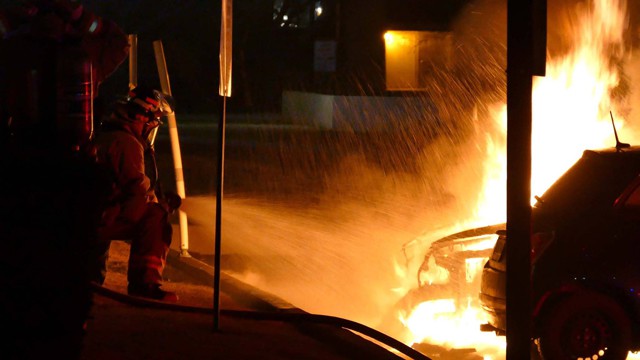 Emergency crews were called to an Aquitaine apartment building in Mississauga on Monday evening after a car parked close to the building caught fire and became fully engulfed in flames.

According to Peel police, multiple calls regarding the fire–including a 911 call from the vehicle’s owner–came in around 9:30 p.m.

Mississauga fire crews were called to the scene to extinguish the dramatic flames. According to police, the car could not be salvaged.

Fortunately, no injuries were reported in connection with the incident (which would have been tragic had someone been in or near the vehicle at the time of the blaze) and the building did not have to be evacuated–nor did it sustain any damage.

According to police, fire crews believe the fire started in the engine block.

The blaze is not considered suspicious.

You can see a video of the active fire, courtesy of Pascal Marchand – The 4K Guy, below.