CAUGHT ON VIDEO: Brampton man gets selfie with Kevin Hart after reaching out via large billboard 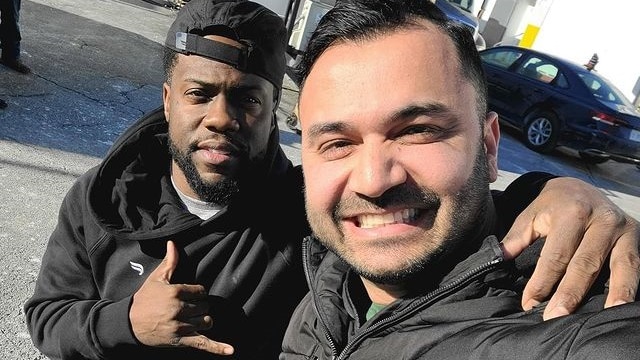 Almost like a Christmas wish, a Brampton man recently got his wish to get a photo with famous actor and comedian Kevin Hart.

When local resident and owner of My Bollywood Body fitness centre Sunny Rabbanim heard that Hart and other A-list celebrities would be in Brampton to work on a new movie, he purchased a billboard ad near the Bramalea GO Station to ask Hart for a selfie.

The message on the large billboard read, “Yo Kevin, I heard you’re in Toronto. I’m a big fan. Can I take a selfie?”

Rabbanim’s message soon paid off, and he got a direct message from Hart on Instagram saying that he would oblige.

Their wholesome interaction was later posted to his MyBollywoodBody Instagram page.

A post shared by The Before and After Expert! (@mybollywoodbody)

“I think your gestures were unreal, and as a person, I couldn’t let that go unnoticed,” said Kevin Hart, who said he had to make it a priority to meet Rabbanim and thank him.

Rabbanim reportedly paid $3,000 for the billboard, and said it was worth it after Hart called the stunt “dope as hell.”

“No, we aren’t renaming Brampton GO Station. It’s a movie shoot,” she said in a tweet.

Additionally, Hart posted a video to Instagram while standing on set at Brampton GO station. In the video, he can be seen thanking his fans after reaching 100 million followers.

Hart has also posted several photos of himself and other cast members in various locations throughout Toronto.

Photo courtesy of Sunny Rabbanim, My Bollywood Body on Instagram