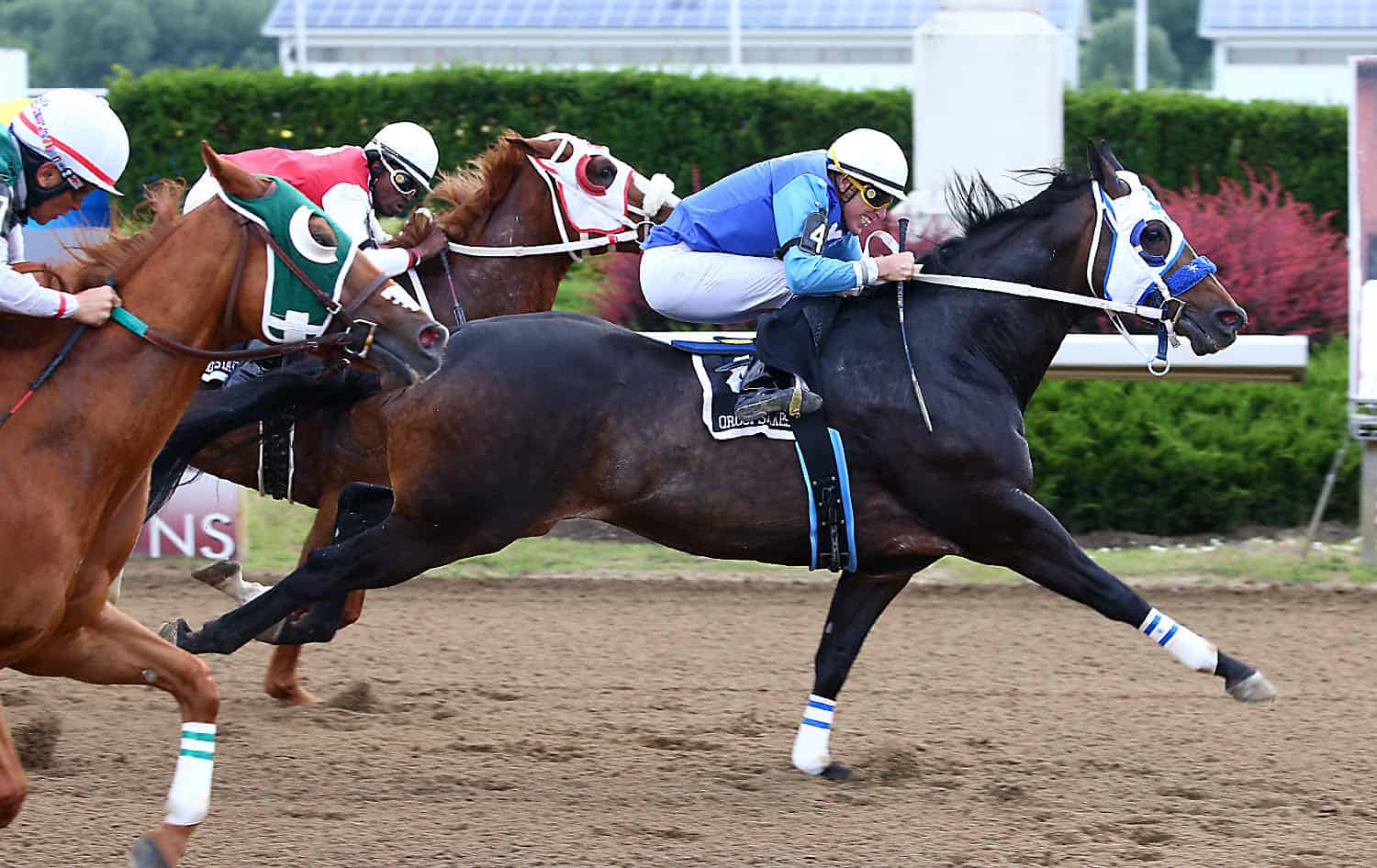 CARNEROS and jockey Brian Bell asserted their authority in the second leg of the QROOI Sprint Series on Wednesday, one of four victories on the day for trainer Jason Pascoe (New Image Media photo)

Solidifying his reign as the top short distance Quarter Horse in the country, Carneros powered to a half-length victory in the $19,870 QROOI Sprint Series, #2 at Ajax Downs on June 29. The 7-year-old gelding’s victory in the 220-yard feature race on the nine-race card was the fourth win of the day for his trainer Jason Pascoe of Pontypool, and third winner for owner Milena Kwiecien of Burlington and third for veteran jockey Brian Bell of Lindsay.

Carneros, who once set a world record for 110-yards, began his 2022 campaign with a victory in the first leg of the Quarter Racing Owners of Ontario Sprint Series and was coming off a close second-place finish in the Picov Maturity at 300-yards to champion Had to Be Ivory.

Sent off as the heavy 1 to 5 favourite on Wednesday, Carneros broke like a bullet and held Mary Schrama’s Ontario-bred mare Night Fishn safe to win in a fast time of 11.935 for a 98 speed index. Steve Hunter’s Zoxtobeyou, also an Ontario bred, finished third.

“Jason has had him in perfect shape this year, he’s an awesome horse,” said Bell, who won three races on the day to move into a tie for second on the leading rider standings with seven wins.

Kwiecien, Ajax Downs’ leading owner, padded her lead with three wins on the nine-race card, held on a warm and breezy afternoon.

“Carneros is just the coolest little horse ever and probably the sweetest gelding on the planet too,” said Kwiecien. “I promised his breeders Butch and Nancy Wise (from Oklahoma) that I will have him forever. He deserves the best home and most cushy retirement.”

Pascoe sent out four winners on the day, five if you consider On Pointe, owned by his mother Sharon, who won race 3 but was disqualified and placed fourth.

Kwiecien also won with her Ontario homebred Countryfried Chicken, trained by Pascoe, and a son of her own stallion Maryland Magic, and Kold Kinda Star (Pascoe), a son of Cold Hard Dash, a stallion she owns in partnership.

Racing continues at Ajax Downs on Wednesday, July 6 with the final of the $60,000-added Ontario Bred Futurity for 2-year-olds. First race post time is 1:30 p.m. You can keep up to date on Quarter Horse racing at Ajax Downs by following @AjaxDowns on social media and visiting www.ajaxdowns.com.