Car in ditch leads to impaired driving arrest in Brampton 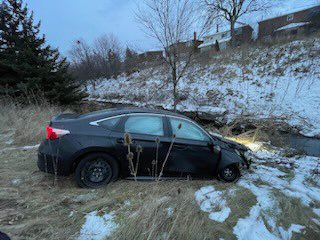 One man is facing impaired driving charges after ending up in a ditch in Brampton.

Peel Regional Police say officers were called to the area of Williams Pkwy. and Vodden St. in Brampton around 7:20 a.m. on Thursday morning after a passerby spotted a car in the ditch.

Patrol officers quickly attended the scene and found a black sedan had ended up off the road. One man was arrested for impaired driving, and police say charges are pending.

No serious injuries were reported, but police closed off westbound Williams Pwky. while crews investigate the collision and clear the scene.

Police did not disclose any additional details about the suspect.

Anyone with information on this incident can contact Peel Regional Police by calling 905-453-3311. Anonymous information may also be submitted by calling Peel Crime Stoppers at 1-800-222-TIPS (8477), or by visiting www.peelcrimestoppers.ca.

This morning, we attended the area of Williams Pkwy/Vodden St in #Brampton & found this vehicle in a ditch after a collision report. Rapid response by our 22 Div Patrol Officers, which led to an Impaired Driving Arrest! 👏 🚨 pic.twitter.com/O6sVmGNy5T