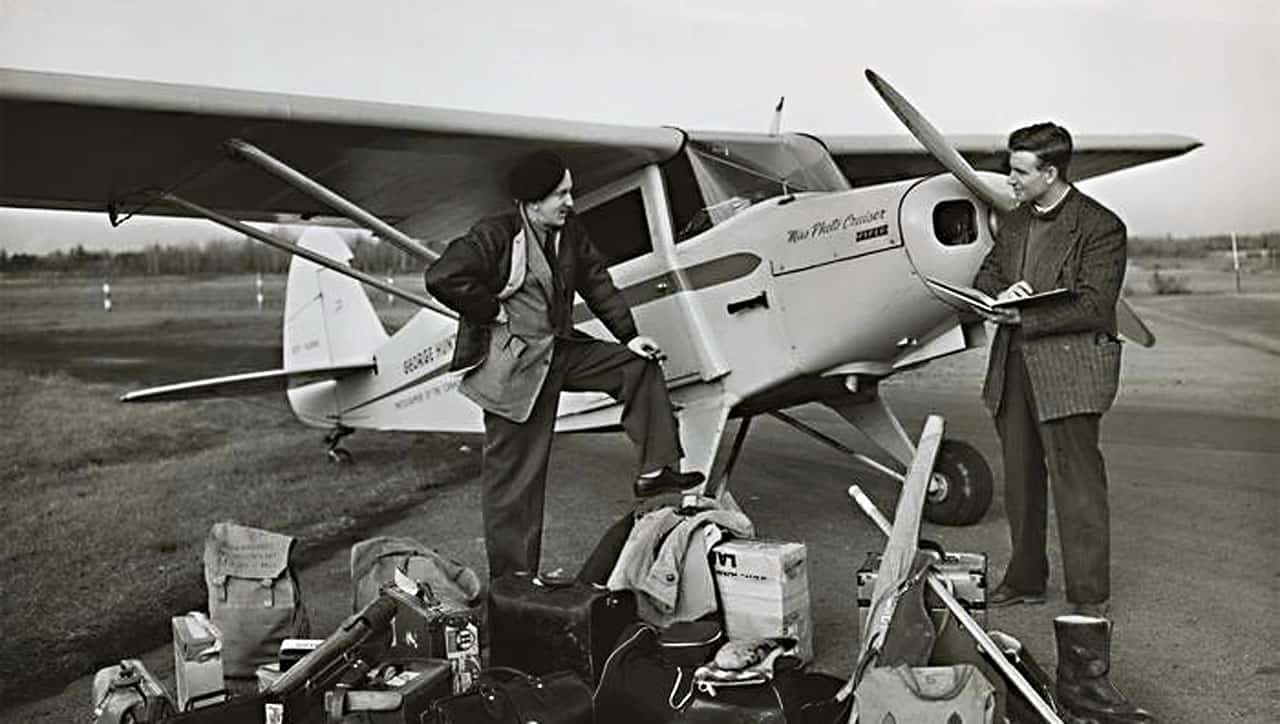 George Hunter, left, is seen getting ready to board his plane for another photo mission.

The Canadian Heritage Photography Foundation (CHPF) has more than 150,000 historic images in its archives but the organization is a risk of closing.

Founded in 2001 in Mississauga by Canadian photographer George Hunter, the foundation has a large collection of his historic images with subjects ranging from early highway photos to anglers trying their luck along the Credit River.

CHPF is currently located at 2227 South Millway, Suite 200 in Mississauga.

Hunter died in 2013 and bequeathed more than 100,000 prints, negatives, slides and to the foundation establishing the largest collection of George Hunter’s work in the world.

“The Hunter collection is an invaluable resource of rich Canadian historical photographs, including his ground breaking aerial photography from the 1950s, and his iconic images of Canadian industry, First Nations communities and Canadian life and times,” the foundation says on their website.

But in recent months the foundation has struggled, like many charities, in the current economic climate, Nicole Plaskett, executive director of the foundation tells insauga.com.

“CHPF is at risk of closing without help from the public,” Plaskett says.

They have launched a GoFundMe to sustain the foundation.

The foundation, a registered charity, is mostly funded through government grants. In 2021, government funding accounted for 76 per cent or $204,579 of the foundations revenue. The rest comes from corporate donations, and donations from other charities. They also generate some revenue in royalties for the images, says Plaskett.

Unfortunately, the government grants are not coming through or are reduced. There are also fewer private and corporate donations, and the foundation hasn’t held their usual fundraisers due to COVID-19 restrictions.

“While our volunteers and staff work hard each year to preserve and grow the collection, due to these exterior factors, we aren’t sure how much longer we can maintain the archive,” reads the description on the GoFundMe page.

“We will run out of funds eventually,” Plaskett adds.

There is a cost to store the physical photos, negative and slides and to save the digital files. The foundation also want to continue to digitize images using archiving best practices, which is costly. The cost to digitize and re-store 200 images properly is around $5,000, Plaskett says.

They have over 150,000 photographic images stored in the archive that need protection. This summer they gathered Mississauga photos from the public for a City of Mississauga heritage photo project.

They have digitized over 17,500 images and made them freely available to the public on the digital collection’s website. And the foundation would like to continue to do this work.

“I think a lot of people are very interested in and like clicking through the photos from the 1930s, and 40s, and 50s,” she says. “So it’s just making sure those are preserved for future generations.”

See the GofundMe page for more information on the fundraiser, people can also donate directly on the CHPF page.