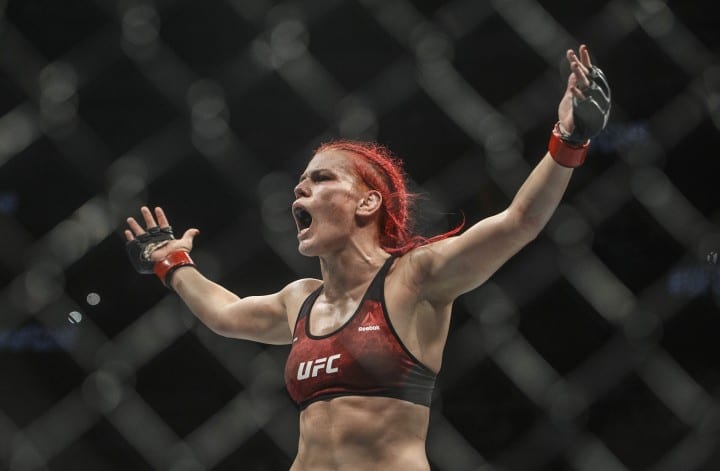 TORONTO — Canadian flyweight Gillian (The Savage) Robertson will look to bounce back from a December loss when she takes on American Miranda (Fear The) Maverick at UFC 258 on Feb. 13 in Las Vegas.

The main event on the card at the UFC’s Apex production facility sees Kamara (The Nigerian Nightmare) Usman defend his welterweight title against Gilbert (Durinho) Burns, ranked No. 2 among 170-pound contenders.

Robertson, a 25-year-old native of Niagara Falls, Ont., who makes her home in Port Saint Lucie, Fla., lost a unanimous decision to Brazilian Taila Santos on Dec. 19 in Las Vegas.

Robertson (9-5-0) came into the Santos fight ranked 13th among 125-pound UFC contenders, having won two straight and four of her last five fights. But she fell out of the rankings after the loss with Santos taking over her position

The 23-year-old Maverick (8-2-0) won her UFC debut in October, stopping Liana Jojua in the first round.

In other Canadian UFC news, bantamweight Aiemann Zahabi will face UFC newcomer Drako (The Great Drakolini) Rodriguez on a televised Fight Night card Feb. 20 in Las Vegas. The heavyweight main event at the Apex features No. 2 Curtis (Razor) Blaydes against No. 4 Derrick (The Black Beast) Lewis.

The two were slated to meet on the same December card that Robertson fought on. But Zahabi, a 33-year-old from Laval, Que., who is the younger brother of renowned trainer Firas Zahabi, had to pull out after testing positive for COVID-19.

Zahabi (7-2-0) has lost two straight since winning his UFC debut in February 2017. Rodriguez (7-1-0) enters the UFC on the back of a victory over Leomana Martinez in Dana White’s Contender Series.