Canada’s Wonderland is Getting its Own Hotel 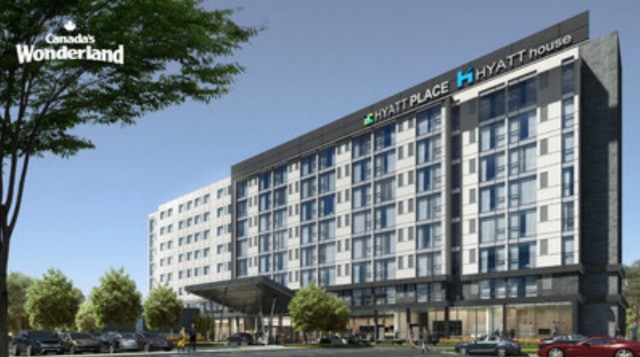 Canada’s Wonderland is on a roll – first, the amusement park announced that it’s getting its own winter festival and the longest, fastest, highest roller coaster in 2019, and now, it’s also getting a hotel.

Cedar Fair Entertainment Company recently revealed that it will open a dual-branded Hyatt Place and Hyatt House hotel on the site at Canada’s Wonderland.

The new hotel will offer 203 rooms, complete with guestrooms and apartment-style suites.

And, it’ll be eight stories tall, located on 16 acres of the parks land, right next to Highway 400.

Free Wi-Fi, an indoor pool, a 24-hour fitness centre, a coffee and cocktails bar, casual dining options, a business center, flexible meeting and event spaces, and an outdoor sun deck, will also be a part of the hotel.

“The new dual-branded Hyatt Place and Hyatt House hotel will continue Cedar Fair’s significant investment in Canada’s Wonderland, one of the portfolio’s largest and most successful parks,” said Cedar Fair president and CEO Richard Zimmerman in a recent statement.

“We expect strong attendance growth there, driven by the introduction of a new record-breaking roller coaster, Yukon Striker, and addition of an immersive holiday event, WinterFest, both launching in 2019. This development will mark the next evolution in the park’s diverse offerings, providing park guests, business travelers and tourists with convenient accommodations in a growing area.

Cedar Fair says it currently owns and operates three hotels at Cedar Point in Sandusky, Ohio, and one at Knott’s Berry Farm in Buena Park, Calif. An additional hotel is under construction at Carowinds in Charlotte, N.C.

Construction is expected to begin in the first half of 2019, with an opening date planned for late 2020

Would you stay the night at Canada’s Wonderland?