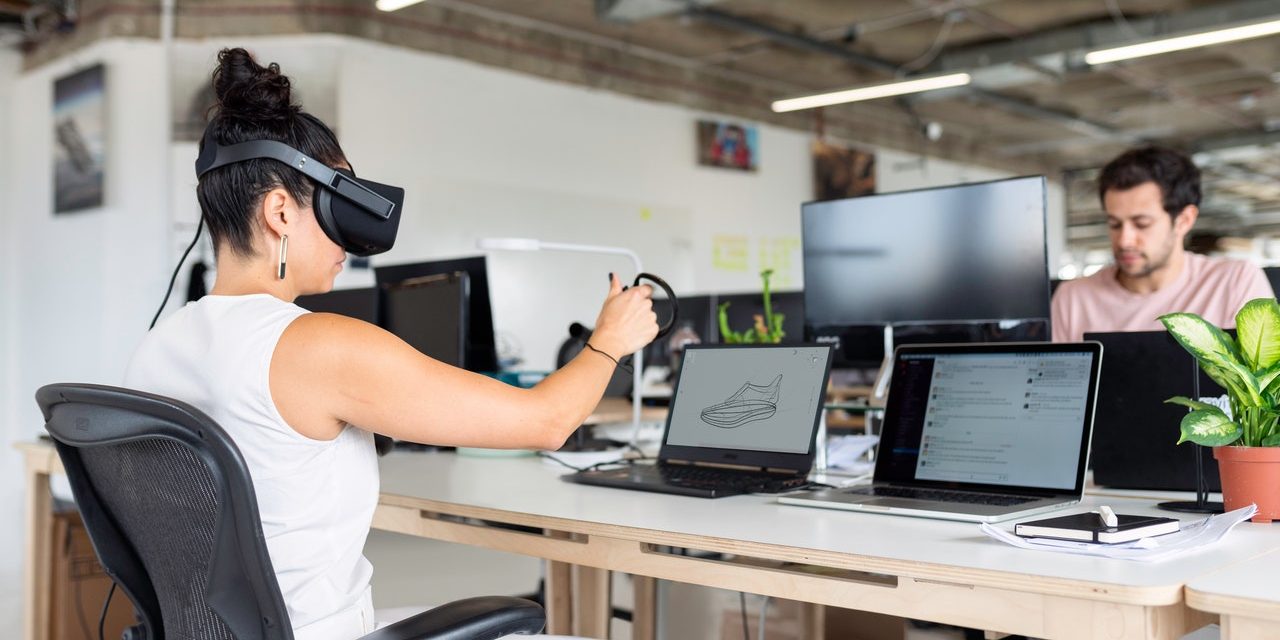 According to LinkedIn data, Hamilton–Burlington has seen its tech workforce grow by 1.90 per cent over 12 months. By comparison, the two aforementioned American cities grew tech talent at a rate of 1.50 per cent. Hamilton-Burlington trailed only three North American cities – all Canadian – in this metric: Calgary (2.20 per cent), Vancouver (2.10 per cent), and Toronto (2 per cent).

#HamOnt and the Greater Bay Area are 4th in North America for our growing tech #labourforce! Learn how we measure up against Toronto, New York, and LA here – https://t.co/E1WVjXZUCn @McMasterU @MohawkCollege @RedeemerUniv pic.twitter.com/U8BjKsCNAx

Calgary has experienced a surge after investing heavily in tech as it looks to diversify from the oil and gas industry. LinkedIn reports that Calgary has spent $20 billion on digital transformation over a three-year period.

LinkedIn’s report also suggests that Canada’s tech talent workforce has outpaced the U.S. in growth over the past 12 months at 1.6 per cent compared to 1.1 per cent.

“The expansion of Canada’s tech workforce comes as a few trends converge: record-level investment is spurring hiring from homegrown tech companies across the country, just as the number of other established industries across Canada double-down on scaling out their tech capabilities,” according to LinkedIn. 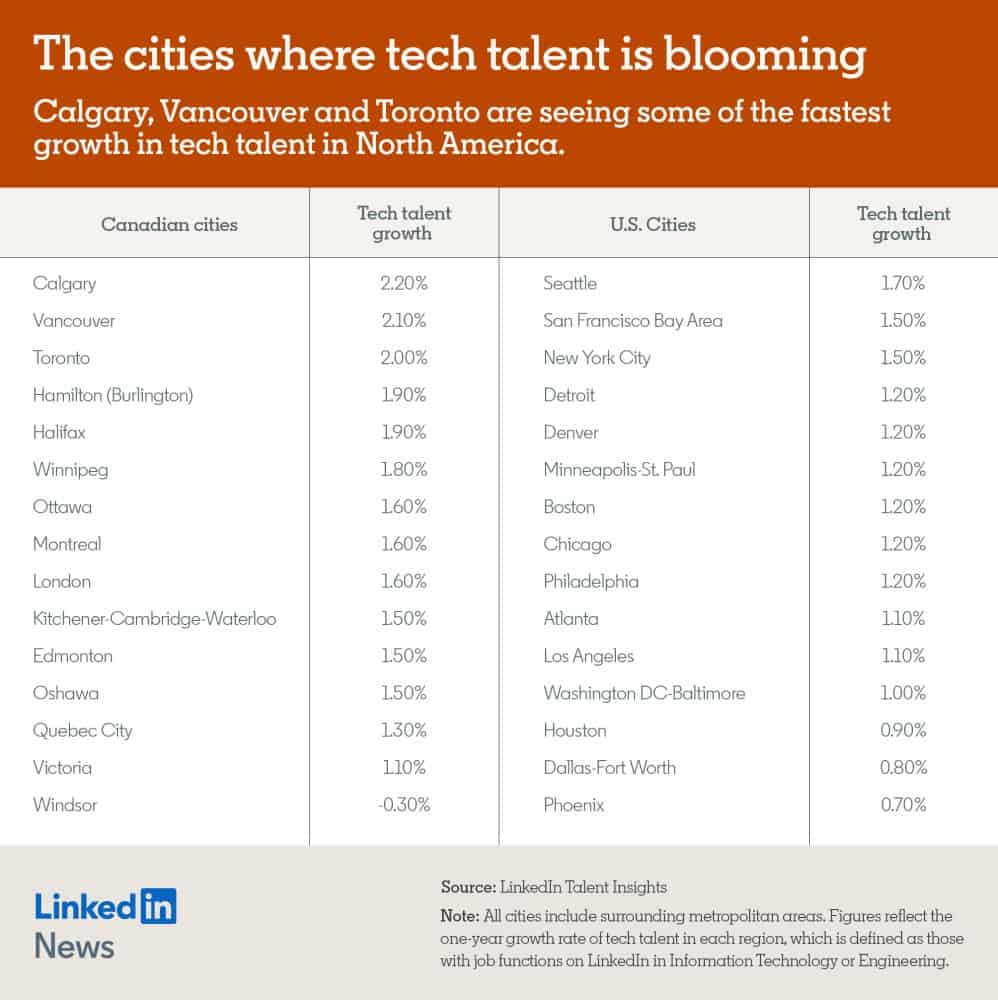 The influx of Canadian talent has also led to more American companies scouting north of the border for prospective employees. A move aided by the broader acceptance of remote workers.

“Major players like Google, Amazon, Netflix, Reddit, Uber and Wayfair have all added tech jobs in Toronto and across Canada recently as they look to expand their presence in the market and tap into a wider pool of talent,” says LinkedIn.

Meanwhile, the number of tech startups continues to increase rapidly in Canada and well-established tech companies are expanding their workforce due to capital investments surpassing $14 billion in 2021 – a 215 per cent increase from 2020.

Wealthsimple, for example, has doubled its number of full-time employees over the last 12 months. 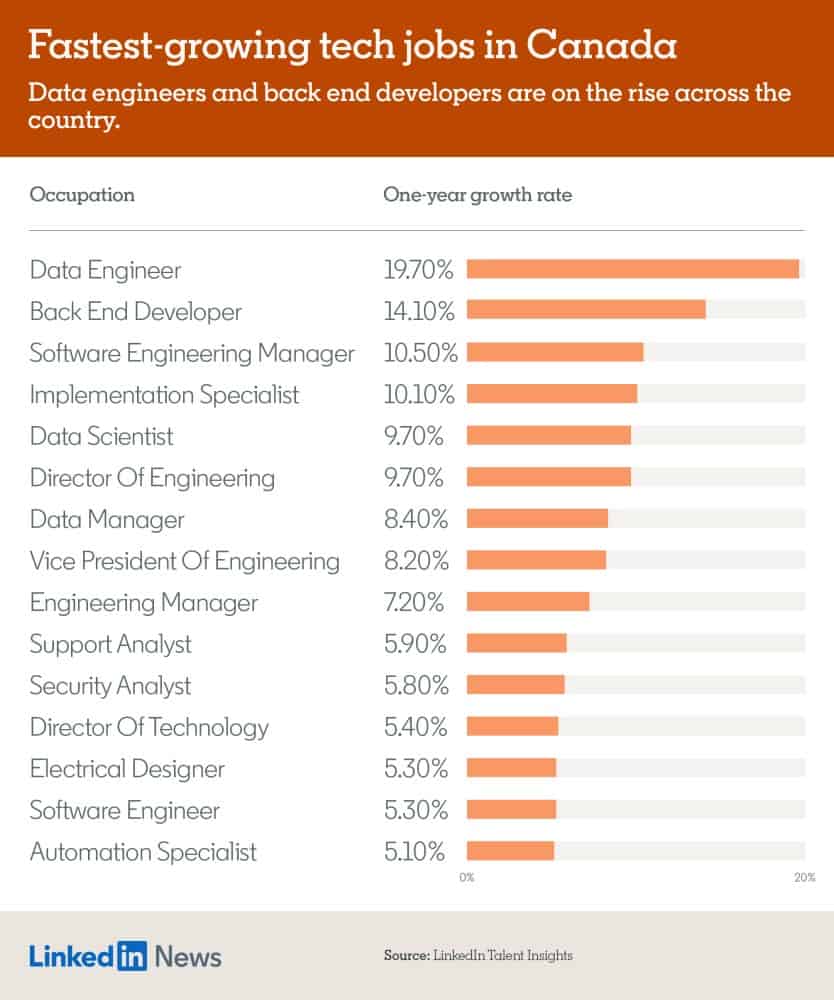 From a skills perspective, LinkedIn data suggests software development, engineering, and programming languages SQL and Java are the most sought after by employers looking for Canadian workers.

The fastest-growing skills, meanwhile, were cloud-computing related, such as Microsoft Azure (which was up 36 per cent over a year), user interface library React.js (33 per cent), and Amazon Web Services (26 per cent).

LinkedIn says its data was pulled from the anonymized and aggregated profile information of LinkedIn’s 810 million members around the world.